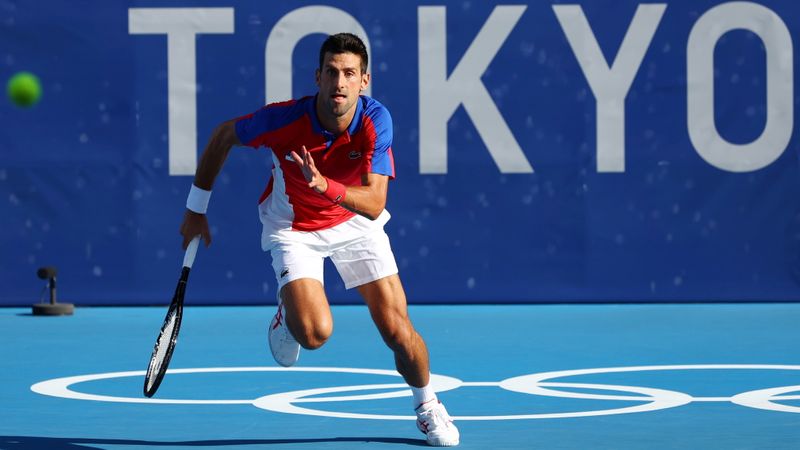 TOKYO (Reuters) -Novak Djokovic eased into the Tokyo 2020 men’s singles quarter-finals on Wednesday, satisfied with his form and organisers’ decision to delay the start of matches amid complaints from players about the hot and humid conditions.

Tennis matches at the Ariake Tennis Park will begin from 3pm local time (0600 GMT) from Thursday, governing body International Tennis Federation said after requests from players who had struggled in the stifling weather.

World number two Daniil Medvedev, who along with Djokovic had lobbied for the schedule change, said he had struggled to breathe during his 6-2 3-6 6-2 third round win over Italian Fabio Fognini.

“Even from the first set, I didn’t feel good enough with my breathing,” said the 25-year-old, who is competing for the Russian Olympic Committee. “That’s why I called the physio, I felt like my diaphragm was blocked.”

Medvedev next plays Spain’s Pablo Carreno Busta, whose compatriot Paula Badosa retired from her women’s singles quarter-final match against Czech Marketa Vondrousova due to heatstroke. Badosa and Carreno Busta also withdrew from the mixed doubles event which began on Wednesday.

Djokovic, who took to the court later in the afternoon, said he was happy with the scheduling change after a comfortable 6-3 6-1 win over Spain’s Alejandro Davidovich Fokina.

He followed up that match with a victory in the mixed doubles, partnering Nina Stojanovic to take out Brazilian pair Marcelo Melo and Luisa Stefani 6-3 6-4.

“It’s first time that I’m playing officially mixed doubles and it’s amazing how well we clicked and the chemistry was very good from the beginning and just played a great match. Perfect ending of the day, two out of two.”

The 34-year-old Serbian, who is aiming to become the first man to win all four Grand Slam titles and Olympic gold in the same calendar year, booked a singles quarter-final meeting with Japan’s Kei Nishikori, who moved past Ilya Ivashka of Belarus 7-6(7) 6-0.

Nishikori, who won the bronze medal at the Rio Games in 2016, is the host country’s last remaining hope for a singles medal after women’s number two Naomi Osaka lost in a third round upset on Tuesday.

Greece’s Stefanos Tsitsipas, who made the final at Roland Garros last month, was beaten 2-6 7-6(4) 6-2 by Frenchman Ugo Humbert.

Ukraine’s world number six Elina Svitolina, the fourth and highest surviving seed in the women’s singles draw, advanced with a 6-4 6-4 win over an error-prone Camila Giorgi of Italy.

“You know when you are higher ranked everyone wants to beat you and everyone is extremely motivated to beat you,” she said.

“I just try to focus on my game and not think so much about what’s going on in the other side of the net.”