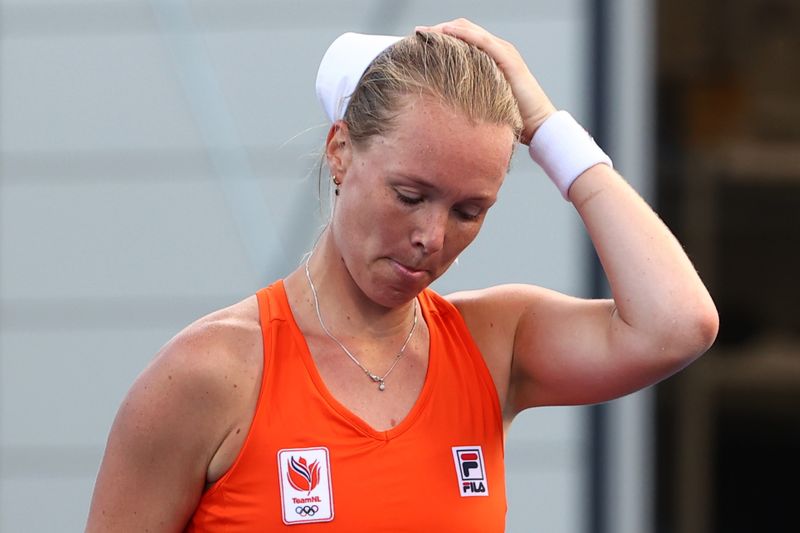 TOKYO (Reuters) – Former world number four Kiki Bertens bid farewell to her career as a singles tennis player on Saturday after a tough three-set defeat to Marketa Vondrousova in the first round of the Tokyo Olympics.

The 29-year-old from the Netherlands, who will still be competing in the women’s and mixed doubles events, announced in June that she planned to retire at the end of 2021 but confirmed this week that she would call it a day following the Games.

Bertens, who will end her career as the 21st-ranked player, told Reuters she had no regrets about bringing the curtains down, having made the decision in part due to a lingering Achilles injury for which she underwent surgery last year.

“I think I can be really proud of myself. I would have never dreamed what I’ve achieved,” she said after her match.

“There’s so many memories, so many great people I’ve met over the years. I’m just going away with a happy face and no regrets.”

In her best showing at a Grand Slam, Bertens reached the semifinals of the 2016 French Open before losing to Serena Williams.

She went on to climb the rankings, winning 10 singles and doubles titles each, and reaching as high as No. 4 in May 2019.

Bertens said she gave it her all in a tense 4-6, 6-3, 4-6 loss to the Czech Republic’s Vondrousova, with the pair playing to empty stands on Saturday after organisers banned spectators to prevent the spread of the coronavirus.

“(Crowds) would have been nice of course. But on the other hand I had my whole team behind me today. They were supporting me every single point,” Bertens said.

“I know my family and my close friends are watching from home. I had this feeling on the court that they were with me. I was just fighting but it was not enough.”

After falling behind a set to start the match, Bertens put on a spirited performance, coming back against 41st-ranked Vondrousova to take the second set 6-3.

But she was unable to capitalise on the momentum, going down a break in the third game of the final set.

She saved two match points on Vondrousova’s serve in the final game but could not manage a third, hitting a backhand long to send the Czech into the second round of the Olympics for the first time.

Vondrousova will next play either Romania’s Mihaela Buzarnescu or Alison Riske of the United States.