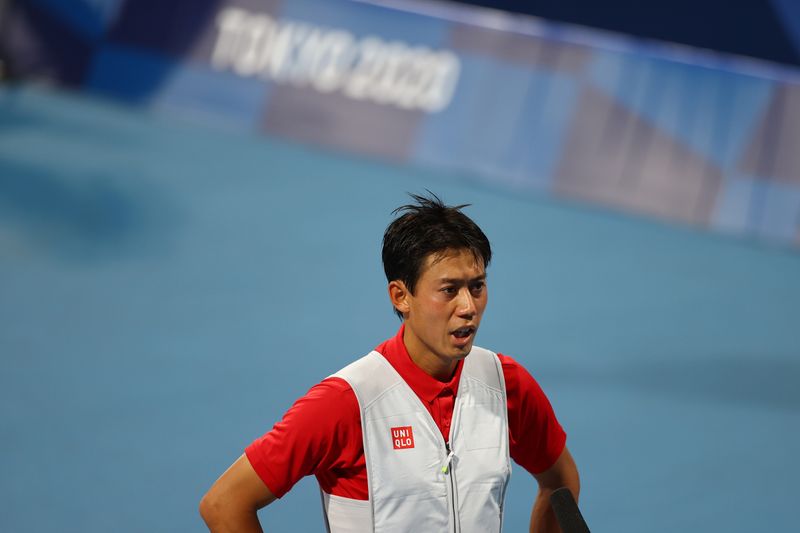 TOKYO (Reuters) – Japan’s Kei Nishikori advanced to the second round of the men’s singles at the Tokyo Games on Sunday, triumphing over fifth seed Andrey Rublev 6-3 6-4 on home soil.

Nishikori, who won the bronze medal at the 2016 Rio Olympics, said he was happy to be back playing high-level tennis after struggling with injuries in recent years.

“You know it’s been a while playing like this and playing to beat top 10 players. I think it’s been two years already,” Nishikori told reporters.

“I was a little bit worried if I got nervous on the court but I wasn’t, so that’s a good sign.”

“I think experience helps a lot. The first Olympics (in 2008) I was really nervous, and I have a bad memory about that (after losing in the first round) but since then, I think I got many experience, I got strong mentally, and I’m playing good.”

Nishikori is ranked 69th in the world but has long been the top Asian player on the men’s tour, having reached a career-high fourth shortly after his run to the U.S. Open final in 2014.

His win followed his compatriot Naomi Osaka’s dominant performance over China’s Zheng Saisai in the first round of the women’s singles on Sunday.

Another Japanese player, Yoshihito Nishioka, however, was not as lucky. He lost both in the men’s singles and doubles events, partnering Daniel Taro in the latter.