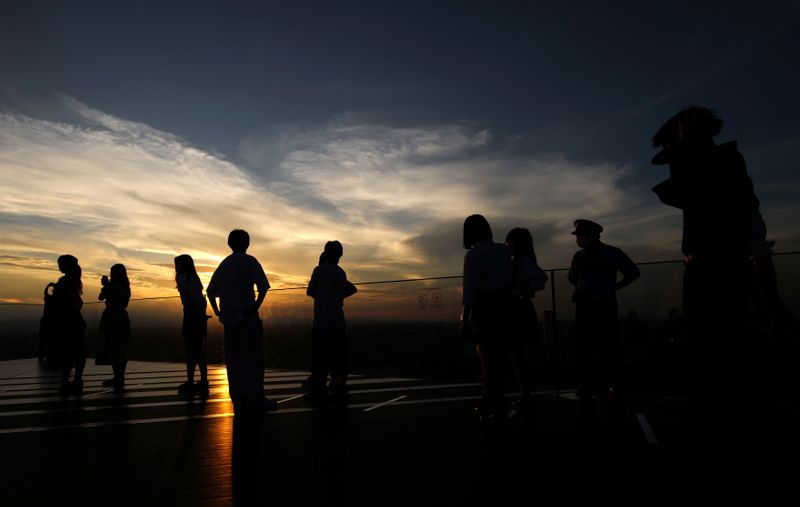 FILE PHOTO: People enjoy the view from Shibuya sky observatory ahead of the official opening of the Tokyo 2020 Olympic Games in Tokyo, Japan, July 21, 2021. REUTERS/Kai Pfaffenbach

TOKYO (Reuters) – Tokyo, host of the summer Olympics, is bracing for a storm that has begun to disrupt competition schedules this week, though the surfers have taken the predicted rougher weather in their stride.

Japan’s hot, wet and unstable summer weather patterns have been a persistent concern ahead of the Games, which are being held under a COVID-19 state of emergency a year after the pandemic delayed the sports extravaganza.

So far, tropical storm Nepartak does not look set to bring devastation to the nation’s capital – indeed it is forecast to weaken by the time it dumps on Tokyo around Tuesday.

But the likely rain and wind will follow intense heat, which caused an Olympic archer to collapse and had skateboarders complaining of unbearable conditions by 9 a.m.

The storm heading toward Japan’s east coast risks elevating sewage levels for water sports in Tokyo Bay – should a deluge overwhelm Tokyo’s century-old storm drainage system. Dangerous levels of E.coli forced the cancellation https://www.reuters.com/article/idUSL8N2P007U two years ago of a para-triathlon in the waters due to host the triathlon and marathon swimming events.

Tuesday’s rowing programme https://www.reuters.com/lifestyle/sports/rowing-organisers-delay-more-races-citing-adverse-weather-forecast-2021-07-25 was disrupted, with races rescheduled for later in the week. Monday rowing events had already been moved to Sunday in anticipation of the storm.

“There will be some sports impacted by the weather,” said Tokyo Games sports director Mikako Kotani. “We are in discussions with the international federations – if they propose to change the schedule in advance, we will consider that option.”

“Sometimes there’s not enough wind for sailing and too much for rowing,” he said. “This is a normal part of every Olympic Games.”

Surfers were characteristically mellow about the gathering storm.

“There’s going to be good waves, there’s a strong typhoon here off the coast of Japan and we know that the waves are getting bigger,” International Surfing Association president Fernando Aguerre told Reuters on Friday.

Some matches in the 2019 Rugby World Cup, which came later in Japan’s typhoon season, were cancelled due to storms.

Nepartak, now a tropical storm over the Pacific, is headed northwest toward Iwaki, some 200km (120 miles) up the coast from Tokyo.

The Japan Meteorological Agency forecasts an 80% chance of rain on Tuesday, with somewhat strong winds, taming the forecast high temperature to 27 degrees Celsius (80 degrees Fahrenheit), down from Monday’s forecast high of 32 degrees (90 degrees).