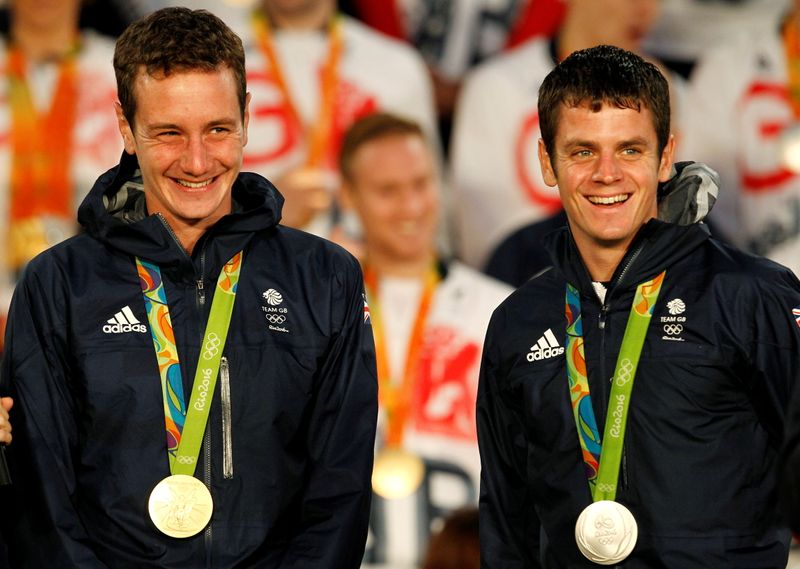 TOKYO (Reuters) – Britain’s Alistair Brownlee was hot favourite at the last two Olympics and duly delivered gold and his absence from Tokyo means a good half of the field, including his younger brother Jonny, will hit the water on Monday believing they can win.

COVID-19 disruptions and a shortage of races over the last 18 months has made form difficult to establish, and if the Games had gone ahead on schedule last year Frenchman Vincent Luis, world champion in 2019 and 2020, would have been the man to beat.

Having finished 11th in 2012 and seventh in 2016 Luis is an experienced Olympic competitor but with a wave of young talent now knocking at the door that might not be enough.

Luis looks a positive rookie alongside 38-year-old Spaniard Javier Gomez, silver medallist in 2012 and ruled out of Rio after a bike crash, and though he looks a long shot for a medal, it will be an emotional return.

“I wish I was a bit younger to be a bit better, but I still think I have my chances,” the five-times world champion said this week. “I’ve done everything in my career, this is just a bonus and I’m going to go for it.”

Gomez edged Jonny Brownlee for second place in 2012, with Brownlee adding a silver to his bronze four years later.

Now, finally racing without the shadow of big brother Alistair, Jonny finds himself among the old guard fighting off the next generation.

He got a stark reminder of that in the last ITU race before the Games in Leeds, England, when fellow Briton Alex Yee finally delivered on years of promise with a searing victory that propelled him into real medal contention in Tokyo.

If the 23-year-old Yee can stay in contention on the swim and bike he has the speed — he was British 10,000m champion on the track in 2018 — that could rip him through the field.

Yee said recently that for a while he struggled to feel he deserved to line up alongside the sport’s elite but his Leeds win wiped away any lingering doubts.

“I think it was a massive step – I was actually the most relaxed I’ve ever been heading into a race,” Yee told triathlon news website tri247.com.

“I didn’t let the race come to me, I tried to define my own race, which was the thing I was most proud of.”

Norway’s Kristian Blummenfelt, who was on fire in the early stages of the season, will probably need to build a healthy bike lead if he is to hold off the likes of Yee and American Morgan Pearson, the latest to try to earn a first Olympic men’s medal for the country that invented the sport.

The race starts at 6.30 a.m. local time but is still expected to be warm. It is an unconventional course in that the 1,500 metre swim consists of one long lap and one short.

The 40km, eight-lap bike course is flat and technical but, without any notable hills to break things up, there is a strong chance of a huge pack coming into the final transition together when it will all come down to the 10km run.

If Yee is among them he will take some beating but the unpredictable nature of the sport – pre-Brownlee at least – means that there are another half-dozen who could easily emerge victorious.