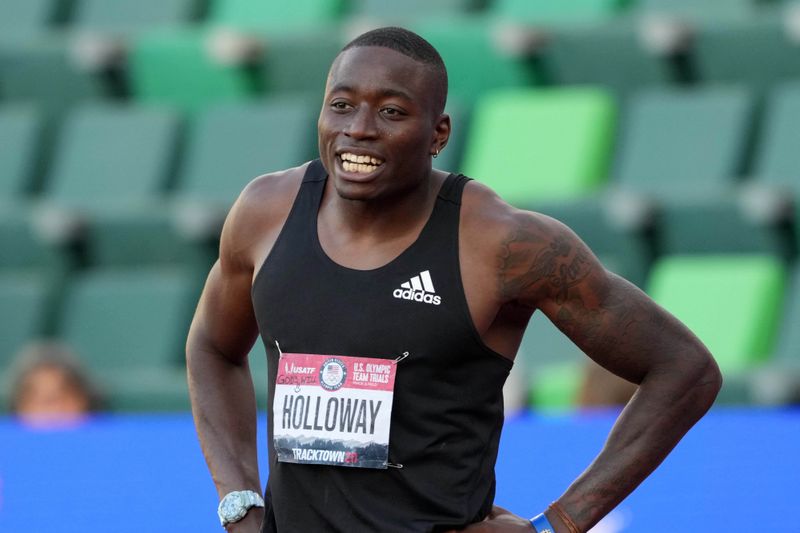 (Reuters) – With world records broken and season’s best marks posted, U.S. athletes showed they are peaking at just the right time for the Tokyo Games as their Olympic trials came to a thrilling end in Eugene, Oregon on Sunday.

Along with Ryan Crouser’s record-breaking heave in the shot put (23.37 metres) and Sydney McLaughlin’s new mark in the women’s 400m hurdles (51.90), hurdlers Rai Benjamin (400m) and Grant Holloway (110m) also came close to getting their names in the record books after eight days of competition.

U.S. sprinters have had to play second fiddle to Jamaican speedsters at recent Olympics but there was plenty to suggest they can turn the tables in Tokyo.

Gabby Thomas delivered a 200m time not seen since Florence Griffith Joyner in the 1988 Games while 21-year-old Sha’Carri Richardson cruised to victory in the women’s 100m final in 10.86.

She will face a showdown with Jamaica’s Shelly-Ann Fraser-Pryce, the fastest woman alive, who won her country’s national athletics championships on Friday.

“I would tell my younger self that it would all pay off when you least expect it,” said Richardson, reflecting on her early Olympic ambitions. “Continue to be who you are.”

With Jamaican sprint king Usain Bolt no longer in the picture, Trayvon Bromell will have his eyes on the top of the podium after winning the men’s 100m final in 9.81 seconds, just a hundredth of a second slower than Bolt’s gold medal performance in Rio.

And after the U.S. was left off the podium in the men’s 200m at the last two Games, 23-year-old world champion Noah Lyles offers genuine hope of a medal after posting a world-leading 19.74 in the final night of competition.

Six-time Olympic gold medallist Allyson Felix, 35, will have one last shot at some hardware after clinching a spot in the 400m for her fifth Games.

The United States has topped the track and field medal table at every Games since 1984 but never won a medal in the women’s hammer. That drought could be coming to an end in Tokyo, with DeAnna Price extending her own U.S. record with an 80.31m throw — a distance only double Olympic champion Anita Włodarczyk has bettered.

New Zealand’s 1,500m runner Nick Willis, who won a silver in Beijing and bronze in Rio, was impressed by the talent on show in Oregon.

“Wow, this has got to be one of the best US teams heading to the Olympics ever. Incredible 10 days in Eugene,” he tweeted.

For some athletes, though, the dream of Tokyo is at an end.

World champion and U.S. record-holder Donavan Brazier saw his hopes dashed in the 800m, while 39-year-old Justin Gatlin, who won 100m gold in Athens in 2004, failed to make an impact in his race, his career appearing all but over.