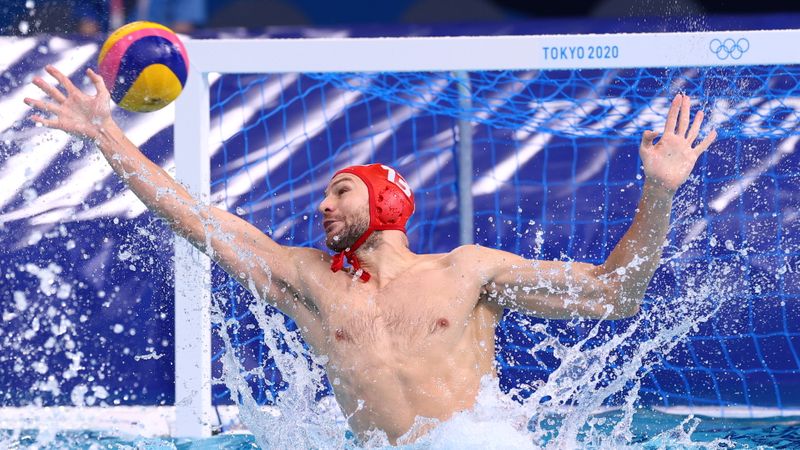 TOKYO (Reuters) – Reigning Olympic champions Serbia got their title defence off to a rocky start when they were stunned 13-12 by a clinical Spain in their opening match of the men’s water polo competition at Tatsumi Water Polo Centre on Sunday.

Spain centre forward Alberto Munarriz Egana top scored with four goals for his team, who have resurfaced as a force to be reckoned with in the pool after finishing runners-up at the most recent World and European Championships.

Spain shaded possession in a match marked by plenty of aggressive play on both sides, peppering Serbia keeper Branislav Mitrovic’s goal with 25 shots before sealing a memorable win with desperate defending at the death.

“It wasn’t an easy match,” Spain captain Felipe Perrone Rocha said. “Serbia are legends of our sport and it’s never easy to beat the Olympic champions.

“We played amazing water polo. A result like this gives us a lot of confidence for the games to come.”

Defeat does not spell disaster for Serbia, who are no strangers to making slow starts at major tournaments, having scraped through the early rounds in Rio five years ago only to blow away the competition in the latter stages.

“We didn’t achieve what we expected,” Serbia captain Filip Filipovic said. “We really wanted to win this game but we need to be honest and admit that Spain were better tonight.

“At the start, I thought it was the most important game for us, but now it’s finished we don’t need to suffer so much.”

Montenegro cruised to a comfortable 15-10 win over Australia to get their first points on the board, while Croatia easily overpowered Kazakhstan in the day’s final match.

Croatia, runners-up at the Rio Games, set an Olympic record for most goals scored in a men’s match with a crushing 23-7 victory that bettered the previous mark by two goals.

World champions Italy fired a warning to their rivals with a 21-2 dismantling of South Africa, whose return to the men’s water polo competition for the first time since the 1960 Games in Rome began with a humiliating defeat.

Centre back Francesco Di Fulvio led the charge with five goals, in a match in which every Italian outfield player managed to get on the scoresheet.

“It was really nice to start this competition against South Africa,” Italy centre forward Michael Bodegas said. “They aren’t one of the favourites here, but we tried to approach the game with big respect for them.”

Hungary, the most successful team in water polo’s 121-year Olympic history with nine gold medals, were edged out 10-9 by Greece while the United States beat hosts Japan 15-13 in the final game in Group A.

(Reporting by Simon Jennings in Bengaluru, editing by Ed Osmond)