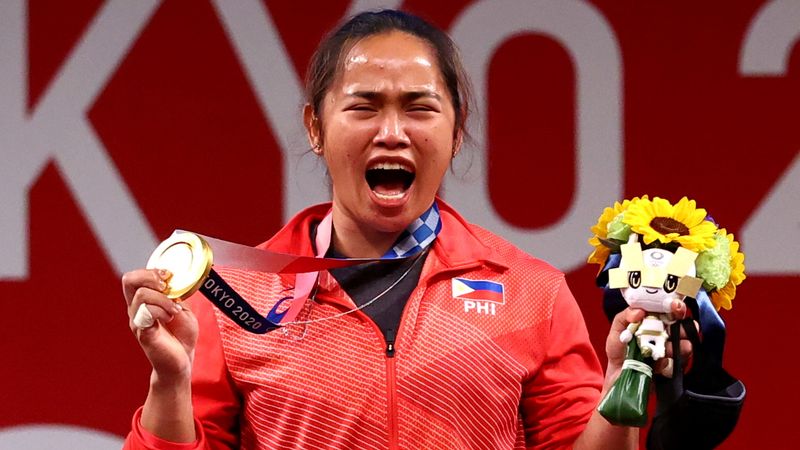 MANILA (Reuters) – Weightlifter Hidilyn Diaz, a day after making history as the Philippines’ first ever Olympic gold medallist, took top billing in an ecstatic nation’s newspapers on Tuesday above reports on a major speech by her president.

But for the 30-year-old being showered with accolades, the story was very different in 2019, when her name was included on a dozens-long list of people accused of plotting against the same man.

Inclusion on the list along with journalists and opposition lawmakers by Salvador Panelo, then spokesman for President Rodrigo Duterte, made Diaz fear for her life, she was quoted by domestic media as saying at the time.

But that did not deter her from her Olympic ambitions.

“Don’t link the name of a person who is busy making sacrifices for the Philippines and who is doing everything to represent the Philippines in weightlifting,” she said in a May 2019 Facebook post that dismissed Panelo’s claims.

Fast forward to the present day, and officials have only praise for the woman who ended the near century-long wait for Olympic gold for a nation that first competed in the Games in 1924.

“We will carve Hidilyn Diaz’ name in the Philippines’ history,” presidential spokesperson Harry Roque told a media briefing on Tuesday.

He distanced himself from Panelo’s list, adding: “I don’t know what … you are talking about. As spokesperson, I did not accuse Hidilyn Diaz of anything.”

Panelo presented the list in May 2019 as an interlinked chart of people who, according to a government transcript, he accused of aiming “to discredit this administration leading to its ouster”.

Diaz’s name appeared on the chart, which the government-run Philippine News Agency said illustrated a “plot to discredit” the government, but Panelo did not refer to her directly.

Duterte, 76, has frequently portrayed his critics as enemies since sweeping to power in elections five years ago, and in a State of the Nation address on Monday he vowed to continue a war on drugs that has killed thousands.

Panelo on Tuesday said it was not his intention to link Diaz to a plot, saying the media had drawn that conclusion after he presented the matrix.

“It is truly disheartening that there are people who seek to take the limelight out of Ms. Diaz’s recent triumph and convert it into a political skirmish of who should and should not celebrate our country’s win,” Panelo, who is Duterte’s chief legal counsel, said in a statement.

Diaz, meanwhile, hopes that those celebrating can draw inspiration from her achievement too.

“I’d like to say to all Filipinos, nothing is impossible,” she said in a news conference that was streamed live on Facebook. “Despite the pandemic, we’re here and we brought home the medal.”