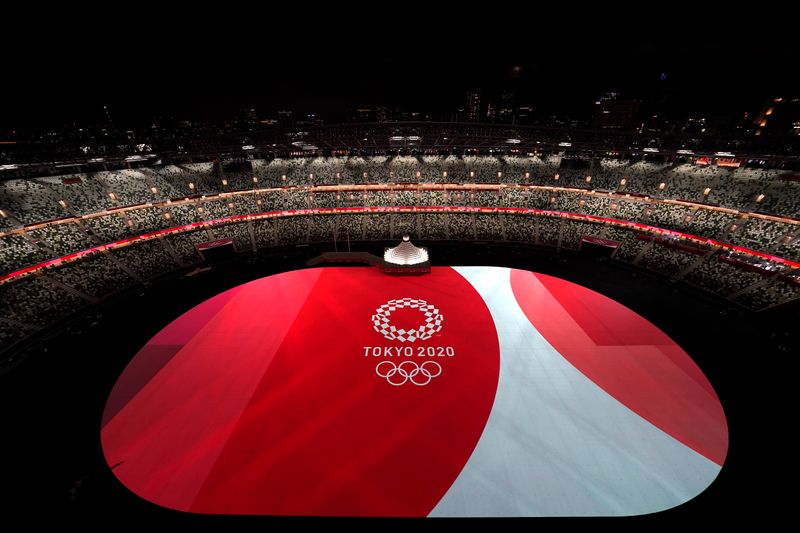 (Reuters) – Tennis star Naomi Osaka climbed a stage in the shape of Mt. Fuji and lit the Olympic cauldron, capping off an opening ceremony like no other.

Here’s what you need to know about the Tokyo Games:

Fireworks, traditional theatre and references to Japan’s rich sports past. Organizers paid tribute to medical workers as athletes from across the world paraded into an almost empty stadium, their smiles hidden behind masks for the first time.

After being passed from baseball legends to children, the torch was handed to Osaka, who walked to the base of the stage, which split open to reveal a set of stairs as the cauldron unfolded like a flower.

Osaka then climbed the stairs and lit the cauldron as fireworks briefly illuminated the sky.

A MOMENT FOR MUNICH

Israeli Olympic team members killed by Palestinian gunmen at the 1972 Munich Olympics were remembered with a moment of silence.

The families of the 11 victims had long asked the International Olympic Committee to hold a minute’s silence at a Games opening ceremony, but until Friday had been turned down.

IT WASN’T AS EASY AS ABC

Global viewers of the ceremony may have been confused at the order of the national parade, where Andorra was followed by Yemen. Look no further than Japan’s unique alphabet.

Unlike previous Olympics held in Japan, where athletes marched into the stadium in the English order of their names, Tokyo 2020 followed Japan’s writing system.

“After Italy, Israel, Iraq, India, Indonesia I thought there was a system but that was followed by Uruguay, Ukraine, Uzbekistan and overall it seems random,” one perplexed viewer wrote on Twitter.

The Olympic teams of Kyrgyzstan and Tajikistan paraded mostly maskless, marking an awkward contrast with other national teams who covered their faces in line with COVID-19 protocols.

The out-of-step gesture by the two neighbouring Central Asian countries came at the formal launch of a global sporting showpiece taking place in spectator-free venues and a COVID-induced state of emergency in host city Tokyo, a year after being postponed on account of the virus.

A few countries stood out for having only either a man or a woman bear the flag, after the IOC encouraged both male and female flagbearers to promote gender equality.

Ethiopian male swimmer Abdelmalik Muktar and Tajik male judoka Temur Rakhimov waved the flags of their respective countries, despite having a mixed delegation.

Congo, on the other hand, had only female sprinter Natacha Ngoye Akamabi represent their mixed team.

German female gymnasts will choose whether they want to wear full body-suits in Sunday’s qualifications at the Tokyo Olympics after receiving accolades for donning the outfits in the past in a stand against the sexualisation of their sport.

The German team wore fuchsia unitards – combined leotards and leggings extending to the ankles – at their podium training in Tokyo on Thursday and said they could choose to wear them again when competition begins.

“We wanted to show that every woman, everybody, should decide what to wear,” said Elisabeth Seitz, who will be competing in her third Games.