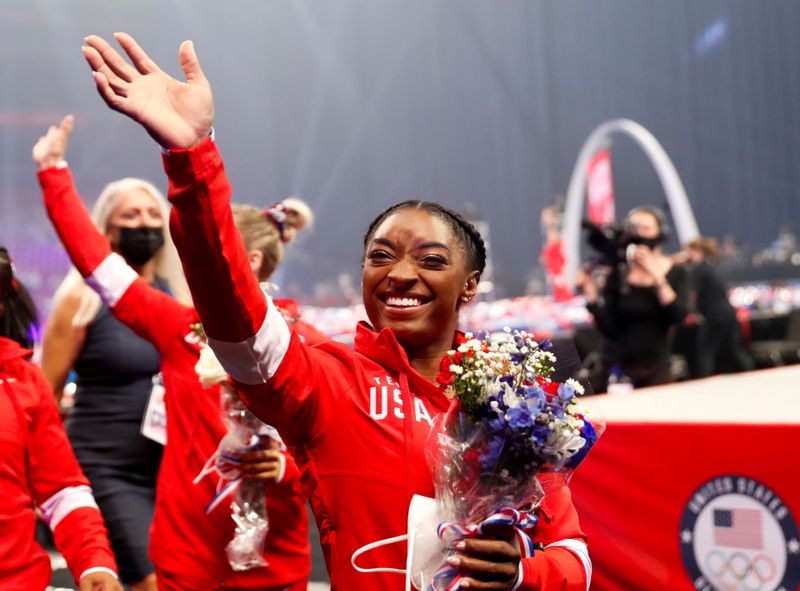 FILE PHOTO: Simone Biles waves at fans after being named to the Olympic team in the closing ceremony during the final day of women’s competition in the U.S. Olympic Team Trials for gymnastics in St. Louis, Missouri, U.S., June 27, 2021. REUTERS/Lindsey Wasson/File Photo

TOKYO (Reuters) – The most closely watched members of the United States Olympic gymnastics team in Tokyo will not be superstar Simone Biles or her fellow athletes, but the doctors and therapists hired to treat them as the sport works to put years of scandal behind it.

It also forced the introduction of long overdue health and safety protocols that forbid medical personnel, coaches, judges and other event staff from having one-on-one time with an athlete, and that will be visible in Tokyo.

“I’ve only been with the organization for a year and a half so I’m not sure what it looked like in Rio but with SafeSport being in place now we do have …prevention policies,” Kim Kranz, USA Gymnastics head of Athlete Health and Wellness told Reuters.

The U.S. Center for SafeSport is an independent nonprofit organisation that provides sports with guideline on how to provide safe environments for athletes and training for coaches and administrators.

USA Gymnastics will have a seven-member medical team – five physical therapists and two reserves – in Tokyo. “There are lots of rules now (they have)… to follow,” Kranz added.

Those include needing formal consent from athletes to treat them, using privacy curtains only when athletes are receiving delicate treatment, and having two adults present when there is an underage athlete in the medical area.

Many of the new rules were implemented in the scramble to fix failures in a system that allowed former USA Gymnastics doctor Larry Nassar to prey on hundreds of young athletes.

A year after the Rio Games, Nassar was sentenced in federal court to 60 years in prison on charges of possessing child sex abuse material.

The following year, he was also sentenced to up to 175 years and up to 125 years, respectively, in two separate Michigan courts for molesting young female gymnasts under his care, including Olympic gold medalists Aly Raisman and McKayla Maroney.

But even as the current squad led by Biles – herself one of the many who were abused by Nassar – prepared to leave for Tokyo, scandal continued to hang over the sport.

On July 14, the U.S. Justice Department’s internal watchdog issued a report that sharply criticized the FBI for dragging its feet on investigating the abuse allegations against Nassar.

In between, there have been further disturbing revelations of abuse.

John Geddert, head coach of the U.S. women’s squad that won team gold at the 2012 London Olympics, was charged with sexual assault and human trafficking. He died by suicide on Feb. 26 shortly after court documents were filed for his arrest.

Other coaches have been suspended for verbal and emotional abuse of athletes, including Maggie Haney, who coached another Rio gold medal winner, Laurie Hernandez.

Kranz conceded that, while U.S. gymnasts felt they were in a safe and protected environment in Tokyo, it would take much longer to win back their trust.

“It’s going to take time,” she said. “I think they are seeing improvement but I don’t think the athletes are quite ready to go all in and say, ‘You guys are awesome’… It takes a long time to get that back.”

Asked if, given the scandals, top therapists and medical personnel were steering clear of gymnastics, she said: “My guess is likely early on that might have been the case but I have not seen that.”

There were plenty of qualified therapists lined up for Olympic assignments and prepared to undergo close scrutiny,” she added.

“We will vet the people who work (with) our medical (teams) very closely… These are typically people the medical team knows but when it’s not we review their credentials, their work history, have had a background check and SafeSport training before they are allowed to come out and work.”

(Reporting by Steve Keating in Tokyo; editing by John Stonestreet)