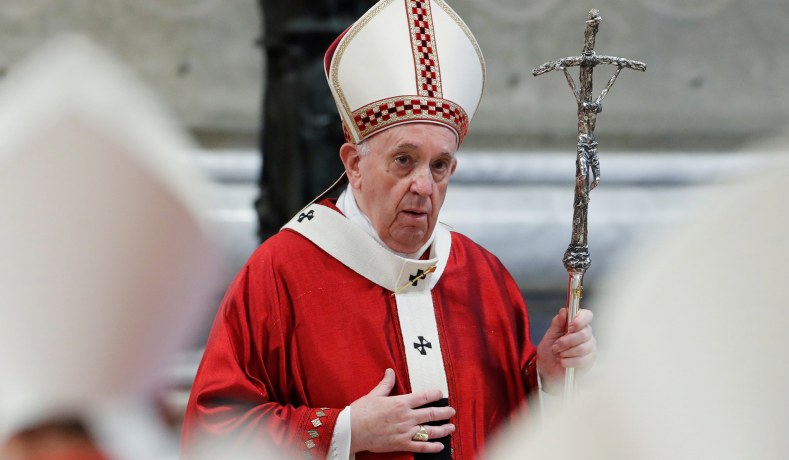 As the resident Bad Trad Catholic in these parts, I feel it incumbent on me to respond to a very odd piece over at First Things, by the esteemed George Weigel. I have never been able to master the elaborate form of piety and politesse that certain commentators have on matters ecclesiastical.

Weigel spends the first half of the piece, needlessly displaying his bona fides as a “a Novus Ordo man.” He writes:

I believe that the restoration of the Easter Vigil and the renewal of the Paschal Triduum by Pius XII were impressive developments of the Roman Rite . . .

I’ve assisted at both Holy Week liturgies — the 1955 and the 1962. I find the idea that 1962 was an improvement perhaps the most baffling liturgical opinion on offer these days.

I believe that the Second Vatican Council’s Constitution on the Sacred Liturgy taught important truths, especially about the eschatological character of the Church’s worship as an anticipation of life in the Kingdom of God, and I agree with its teaching that the Church’s worship should be conducted with a “noble simplicity.”

I think the suggestion from some liturgical traditionalists that the survival of Catholicism demands the restoration of the old Prayers at the Foot of the Altar, the old Offertory prayers, and the old Last Gospel is ridiculous: which is also how I view the claims that the Council’s liturgical constitution and its immediate implementation were the result of a cabal of Freemasons, communists, and homosexual clerics.

I sort of understand the rhetorical move being attempted here, but I don’t know if there is an audience for it anymore. If it’s progressives who hate the pre-Conciliar liturgy, I can’t imagine any other response from them but simple chortling.

I prefer gothic chasubles to fiddleback chasubles and I dislike lace surplices.

Finally in the last paragraph, Weigel summons himself not to criticize the pope, but to say

progressive Catholicism has typically been characterized by an authoritarian streak—a tendency to bullying and intimidation that certainly bespeaks impatience and may suggest a lack of confidence in its proposals and arguments.

WHOA! Watch out! There’s a lack of confidence out here somewhere.

Pope Francis has just asked the world’s bishops to submit to a form of curial micromanagement that would make your average commisar roll his eyes, for the express purpose of euthanizing the Mass of Ages. And all our Novus Ordo men can offer in response is to spit on our vestments, and speculate about a “lack of confidence.”

If this is the elaborate apology one needs to make before not quite saying the plain truth that Francis is acting like vengeful jerk and proposing nonsense as theology, I’d rather take my chances with the Freemasons, communists, and homosexuals. They are far less boring and more direct than our good Novus Ordo men. They would at least offer a feline smile when I say what I think. The Novus Ordo men offer their enemies the ashes of burned fiddlebacks, and their wayward traditionalist allies a ball-gag, and endless attempts at shushing us. How embarassing.

On one point, Pope Francis has been right: Hagan lio!