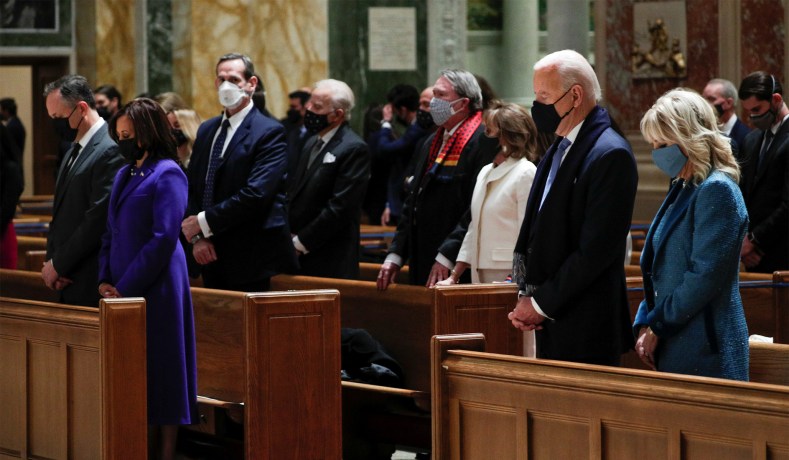 President Joe Biden’s inaugural address, with its soaring phrases and stirring moments, eloquently laid out challenges facing our country and proposed unity as the solution. Watching his speech that January day, I dared to be hopeful. True unity is an American ideal, and indispensable because of our ethnic, ideological, and religious diversity. Given today’s division and rancor we need it more than ever. Perhaps here was someone — a fellow Catholic — who could bridge our difficult divides on the strength of the beautifully articulated, central tenet of our Christian religion: All men and women are created by a God whose love sustains our existence and who demands that we love each other as he has loved us.

That was 100 days ago. During that time, so many of the early actions he has taken have not built bridges but deepened chasms, and this is especially true of those that defy the core ideals of our faith.

Right out of the gate, Biden rescinded the Mexico City Policy, an executive order that prohibits U.S. tax monies from being spent performing or promoting abortions in developing countries. The prior administration had not only reinstated the Mexico City Policy but expanded it, an act welcomed by Catholics and other Americans who understand the shared dignity of all people and the way ideological colonization offends the dignity of the poor. Encouraging poor women to abort their children instead of helping them meet their very real needs is the worst kind of false charity. That a Catholic president should restore funding for abortions overseas as one of his first acts is deeply troubling.

Here at home, Biden’s administration has proposed new rules that would send tens of millions in Title X Family Planning grants to abortion providers such as Planned Parenthood. This would undo the previous administration’s progress towards disentangling American tax dollars from funding abortion — a separation most Americans support. The business model of abortion clinics with access to Title X money includes using it to “keep the lights on” while dispensing some contraception but also performing abortions. It’s hard to see how sending millions of dollars to abortion businesses such as Planned Parenthood fosters the unity Biden touted, not to mention the fact that it contradicts our shared faith’s teaching on the sanctify of all life.

The humanitarian crisis unfolding at our southern border is another disappointing consequence of the administration’s policies. By relaxing rules around deportation for minors Biden, has encouraged thousands of Central American parents to hand their children over to unscrupulous coyotes and traffickers. Just in March, the Border Patrol encountered over 18,000 unaccompanied kids. We will never know the extent of the suffering that vulnerable boys and girls experience making the dangerous journey with strangers, although we’ve seen plenty of individual examples. Just last week a shocking video surfaced of a toddler girl and her five-year-old sister being dropped by traffickers over the 14-foot border wall in New Mexico. The ever-more-crowded holding pens for children are short-staffed and there are allegations of sexual assault as well as reports of mixing of healthy kids with those infected with COVID. Instead of unifying Americans who support the welcoming of strangers — a core Catholic value — with those who worry that a disordered border creates more misery than it alleviates, Biden has further divided us along troubling lines.

More disappointment was in store for us as we watched President Biden supporting passage of the deceptively named Equality Act. If made law, this would legally redefine “sex” to mean sexual orientation and gender identity. It not only turns science and common sense upside down, but discriminates against people of faith. As Ryan Anderson, president of the Ethics and Public Policy Center, has pointed out, religious institutions will “face federal sanction for upholding the teachings of mainstream biology and the Bible, modern genetics and Genesis, when it comes to sex and marriage.” As a Catholic, Biden should understand that “male and female He created them” is a biblical idea that we cannot abandon simply because progressives have decided that now there are 72 genders . . . and counting. How is it unifying to support legislation that would expose religious schools, hospitals, and shelters to legal harassment and even shutdowns for standing by age-old and scientifically accepted definitions of sex?

These are but a handful of the ways President Biden has failed to live up to his call for unity. Sadly, he has chosen to follow the dictates of the loud activist wing of his party, and not the dictates of his faith or even of good sense. These first 100 days have dashed my hopes, and those of other Catholics once moved by calls to unity and the image of a well-thumbed rosary in an old man’s hand.

Grazie Pozo Christie is a policy adviser for The Catholic Association.