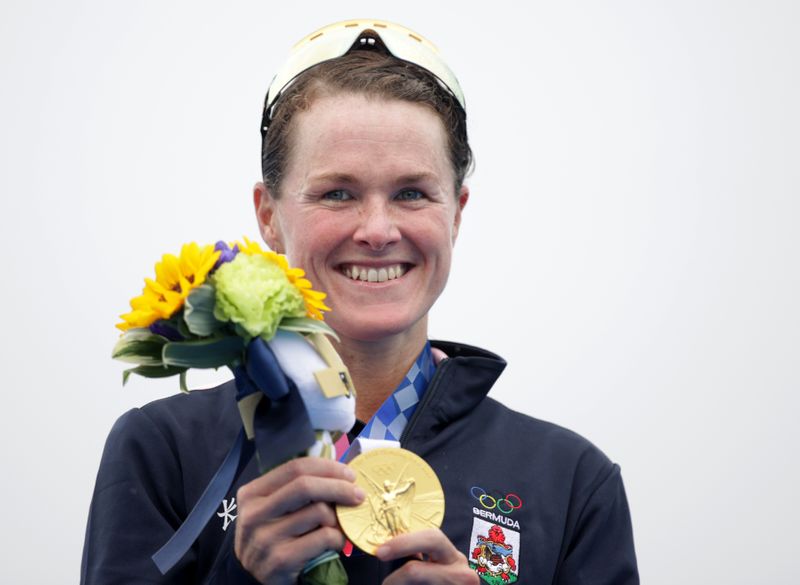 TOKYO (Reuters) – Flora Duffy has already been awarded an OBE for services to Bermudan sport and now, having added the country’s first Olympic gold medal to her sparkling CV, she will hope things pan out better than for the island’s only other Games medallist.

After collecting a heavyweight boxing bronze in 1976 Clarence Hill’s life spiralled downwards into drugs and he eventually served jail time for dugs offences and armed robbery.

Duffy, it is safe to assume, is destined for better things and has already been feted on Twitter by the country’s Premier David Burt after her superb victory in Tuesday’s Olympic triathlon.

With just under 64,000 residents, the British Overseas Territory in the North Atlantic Ocean is now the smallest nation to win a Summer Olympic gold medal and Duffy said she hopes her impressive victory on Tuesday will inspire the next generation.

“We are a small country but are very concentrated on sport,” she said. “I’m so grateful to achieve a personal thing but its bigger than me and that’s a cool moment. It will inspire the youth of Bermuda and show that competing on the world stage from a small island is really possible.

“When I was little we went once a year to race in the United States and that’s when it became my dream to become a professional athlete.”

Duffy took part in the 2008 and 2012 Olympics but after travelling to Rio in 2016 with real medal hopes she managed only a disappointing eighth place.

Three world championships across various triathlon disciples that year and a Commonwealth gold in 2018 underlined her quality as one of the very best in the sport but it was the Olympics that drove her and, at 33, she knew Tokyo was going to be her last chance.

“To be Olympic champion has been my dream since I was a little girl so going through my head at the finish today was maybe relief after the pressure and expectation of 2016,” she told reporters.

“The test event here in 2019 was my first race for over a year after a really bad foot injury. That was the first step back towards what should have been the 2020 Olympics so an extra bonus year did help – though this year wasn’t the smoothest either.

“In the finishing chute maybe I replayed a little bit of all that it took to get here. It feels incredible, it makes all the injuries, hard times and the tears completely worth it.

“It was extra special to really have to dig deep to be able to get back to this form and to be able to execute at this level today against such a strong field was just perfect.”