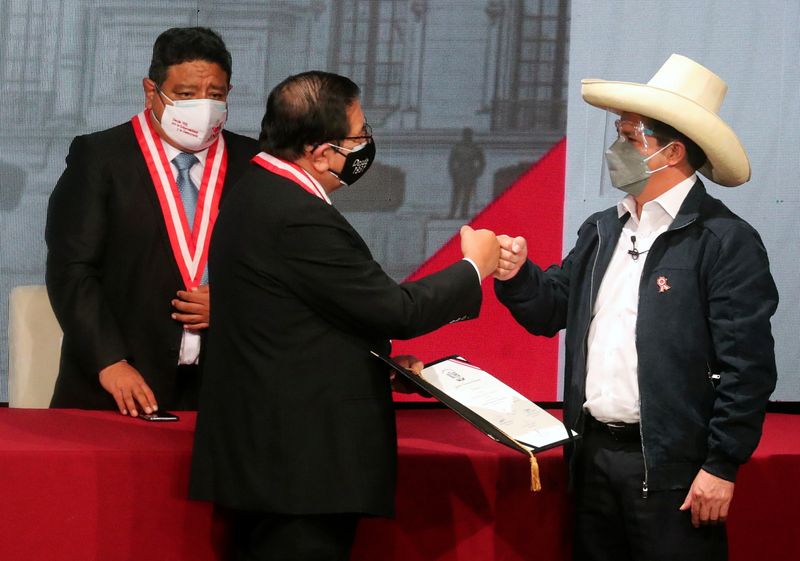 LIMA (Reuters) – An opposition-led alliance won a vote on Monday to lead Peru’s Congress, a setback for socialist President-elect Pedro Castillo on the eve of his inauguration and a sign of challenges ahead to his plans to reform the constitution and hike mining taxes.

A leadership team headed by centrist legislator María del Carmen Alva from the Popular Action party won by 69-to-10 votes against a rival grouping led by retired military man Jorge Montoya from an ultra-conservative right-wing party.

A list of candidates proposed by Castillo’s Free Peru party was rejected over procedural issues, underscoring challenges the outsider president-elect faces pushing through reform in a fragmented legislature where no single party has a majority.

Alva, who will be Congress president for the 2021-2022 legislative period, had key support from the right-wing Popular Force party of Keiko Fujimori, who narrowly lost to Castillo in a knife-edge June 6 run-off and has pledged to fight him.

Castillo gained strong support from poorer, rural Peruvians on a platform pledging to redraft the Andean country’s decades-old constitution and sharply raise taxes on copper mining firms to pay for reforms in healthcare and education.

The rise of the former teacher and son of peasant farmers has, however, rattled Peru’s political and business elite, despite moves by Castillo to distance himself from hard left regimes in the region and bring on more moderate advisers.

On Sunday Castillo announced a list of candidates to lead Congress picked from allied parties rather than his own to support the “governance” of the country, though the list was rejected as one candidate was not properly registered.

Castillo, 51, will be sworn in as president in Congress on Wednesday, when Peru celebrates its bicentennial of independence. He is expected to give his first address as president, laying out his government’s plan for 2021-2026.