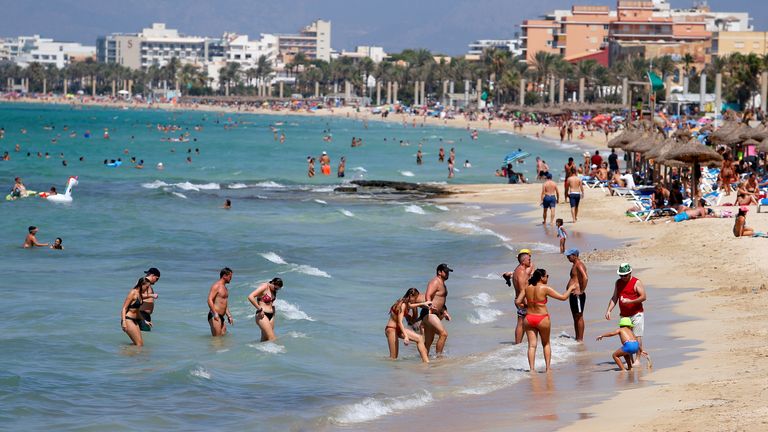 Boris Johnson has not “given up” on allowing Britons to jet abroad from 17 May as he raised the prospect of holidaymakers being able to use cheaper and faster COVID tests on their return to the UK.

Under the prime minister’s roadmap for lifting lockdown restrictions, international travel without a reasonable excuse will not be allowed to happen earlier than 17 May.

However, with many countries across Europe suffering a third wave of COVID infections, the government has not yet been able to confirm whether foreign holidays will be allowed beyond that date – leaving many families uncertain whether to book a summer break abroad.

Speaking on a visit to an AstraZeneca laboratory in Macclesfield on Tuesday, Mr Johnson acknowledged people were “impatient” to book their holidays as soon as they can.

But he said the government needed to be “prudent at this stage”.

The prime minister also responded to a call from the boss of easyJet to allow people to use lateral flow tests – rather than more expensive PCR tests – as part of border requirements when returning from abroad.

In a document published on Monday night, the government said – when non-essential international travel is allowed – it will be based on a “traffic-light” system with those returning from “green” countries not needing to isolate on their return to the UK.

However, the document added “pre-departure and post-arrival tests would still be needed”.

Under current travel rules, anyone returning to the UK from a “red list” country is required to quarantine in a hotel for at least 10 days on arrival.

And those travelling from all other destinations must quarantine at home for 10 days and take COVID tests on days two and eight after their arrival in the UK.

These PCR tests can be booked from a list of government-approved providers and cost around £170-£200.

But asked on Tuesday whether lateral flow tests could instead be allowed to fulfil post-arrival testing requirements for holidaymakers returning from “green” countries this summer, the prime minister said: “I do think we want to make things as easy as we possibly can.

“I think the boss of easyJet is right to focus on this issue. We’re going to see what we can do to make things as flexible and as affordable as possible.

“I do want to see international travel start up again. We have to be realistic – a lot of the destinations we want to go to at the moment are suffering a new wave of the illness, of COVID, as we know.

“We can’t do it immediately, but that doesn’t mean we’ve given up on 17 May. We’ll be saying as much as we can, as soon as we can, about international travel.

“I know how impatient people are to book their holidays if they possibly can. But we just have to be prudent at this stage.”

Mr Johnson has already announced that, from Friday, everyone in England will be able to access free lateral flow tests twice a week as a means of helping to prevent new outbreaks.

Earlier on Tuesday, easyJet chief executive Johan Lundgren said keeping the current testing rules for those returning to the UK would only reopen international travel “for people who can afford it”.

Mr Lundgren said PCR tests are “way over and above what the cost is of an average easyJet fare”.

“If they choose, however, to go down that route to have the tests in place, it should be the same type of testing, the lateral flow testing, which is much cheaper, more accessible, that is being used to open up the domestic sector as an example.”

Meanwhile, Virgin Atlantic chief executive Shai Weiss has called on the government to enable people to return from “green” countries without the need for tests.