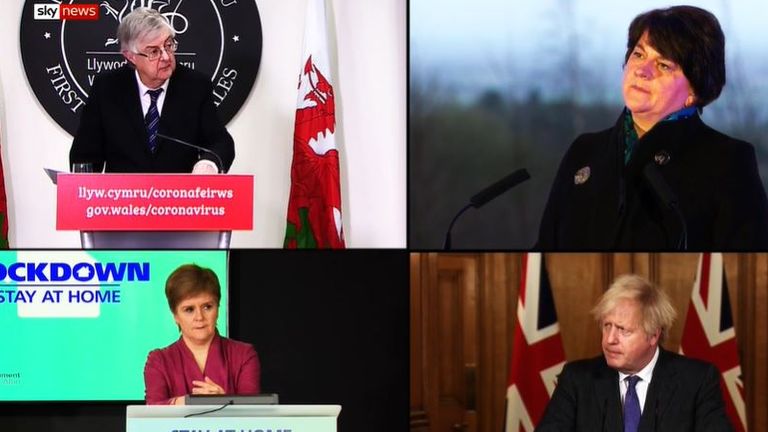 Mr Brown said Prime Minister Boris Johnson should set up a commission on democracy to review how the UK is governed.

Writing in The Daily Telegraph, Mr Brown said: “The choice is now between a reformed state and a failed state.”

He added: “The commission will discover that the United Kingdom urgently needs a forum of the nations and regions that brings them and Boris Johnson together on a regular basis.

“No country can have national integration without political inclusion, and the commission might start by learning from the experience of countries like Australia, Canada, Germany and America where, partly because of British influence in times past, second chambers are senates of their regions, and minorities who can easily be outvoted are guaranteed a stronger voice.”

Mr Brown said that Mr Johnson should be promoting the armed forces and the NHS as examples of the union’s “everyday benefits”.

It comes after a poll in The Sunday Times showed:

Nicola Sturgeon has accused Mr Johnson of being “frightened of democracy” and said she will seek a “legal referendum” on Scottish independence.

Scotland’s first minister claimed the prime minister “fears the verdict and the will of the Scottish people” over his refusal to agree to another independence vote.

Meanwhile the leader of the devolved administration in Northern Ireland, Arlene Foster, said a referendum on whether the country should stay part of the UK or unify with Ireland would be “divisive” and “reckless”.

A Cabinet spokesman said the public in Scotland want to see the UK’s politicians “working in partnership to focus on defeating coronavirus”.

“That remains the top priority of the UK government, which has supported jobs and businesses across all four nations throughout the pandemic.

“The question of Scottish independence was settled decisively in 2014, when Scotland voted to remain part of the UK.

“Now more than ever, we should be pulling together to strengthen our United Kingdom, instead of trying to separate it.”