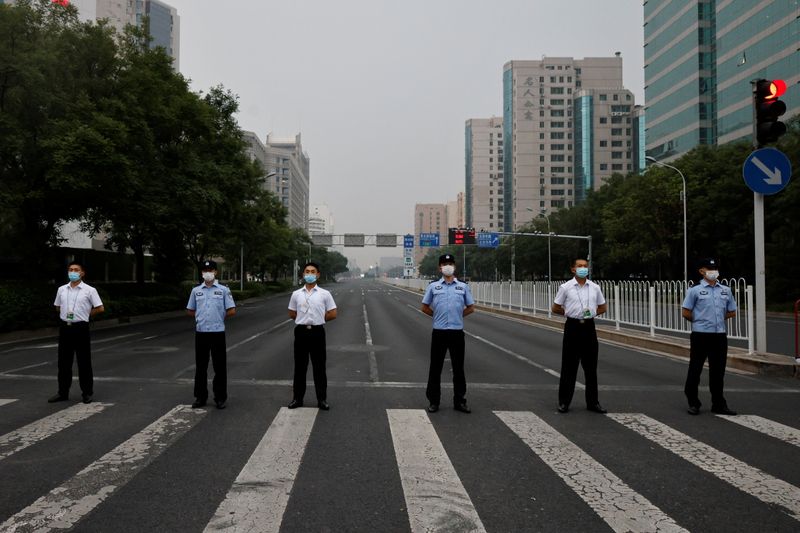 Police and security personnel block a road before a rehearsal of a fireworks display near the National Stadium ahead of the 100th founding anniversary of the Communist Party of China in Beijing, China June 25, 2021. REUTERS/Thomas Peter

BEIJING (Reuters) – Behind roadblocks and hundreds of police in the Chinese capital of Beijing on Friday, fireworks resembling the national flag bloomed over the city as part of secretive and tightly choreographed rehearsal for the 100th anniversary of China’s Communist Party.

Beijing has shut down traffic, decked streets in patriotic flower arrangements and national flags, and ramped up surveillance and security this week in preparation for the centenary event on July 1.

“Without the Communist Party, there is no new China,” read new propaganda posters throughout the city.

Plans for the event haven’t been fully revealed, though state media and government agencies have hinted at a large-scale theatrical event in Tiananmen Square. A performance is scheduled for Monday at the Bird’s Nest stadium, built for the 2008 Olympics.

The anniversary has been preceded by a clampdown on potential dissident activity, including a spate of arrests this year under a law banning the defamation of national heroes, and an online venue for citizens to report “historical nihilists,” a phrase referring to those sharing unsanctioned versions of Party history.

Upgraded security and its attendant disruption isn’t unusual ahead of major political events in the capital, but the fanfare has taken on added importance amid new political challenges to the Party at home and abroad.

“It comes down to legitimacy … what you’re sitting through in those events is an extended performance for the benefit of the domestic public to basically legitimise an unelected government, which is why, in short, these things are so important,” said Graeme Smith, a fellow in the Department of Pacific Affairs at the Australian National University specialising in Chinese politics.

NO ROOM FOR ERROR

On June 23, residents in the old-style hutongs in Beijing awoke to find alleys decked out in a coordinated display of Chinese national flags, visible by almost every doorway.

Beginning in May, teams dressed in orange work uniforms became a common sight throughout the city, upgrading roadside decor and creating elaborate floral arrangements made up of 2.3 million seedlings and potted plants, according to state media.

At the same time, security organs have ramped up surveillance and other restrictions.

A Dongcheng police official told Reuters that such visits were “normal inspections”.

People on a citywide list of residents suffering from mental illnesses, including schizophrenia and bipolar disorder, received house calls and phone checks from authorities, a common practice ahead of major political events, according to two people who received the calls and a doctor who said many of their patients had been contacted.

The Beijing city government did not reply to a request for comment.

Four merchants on China’s top e-commerce site, Taobao.com, told Reuters they had been banned from shipping items including gas bottles and other flammable products to Beijing residents beginning in June. Taobao’s owner, Alibaba, did not immediately reply to a request for comment.

“It’s like having an enormous birthday party and not wanting your embarrassing neighbours to spoil it,” said Smith, adding that propaganda around so called “sensitive days” on Beijing’s calendar can also serve as a warning to potential dissidents.

“The whole army will transform the political enthusiasm radiated by the celebrations into practical actions to advance the cause of strengthening the country and the army in the new era,” Ren Guoqiang, spokesman for the Ministry of National Defence, said on June 23.

Two people working at the Tianjin-based censorship unit of social media firm Bytedance Ltd and one Beijing-based censor for Chinese search engine Baidu.com said they had received new directives in recent months on removing negative commentary about the anniversary. Neither company immediately replied to requests for comment.

“There’s no room for error,” said one Bytedance staffer, who declined to be named because they are not permitted to speak to foreign media.

As of Friday, patriotic fervour on display in Beijing’s streets was largely mirrored online. Despite tight censorship, however, a small number of netizens griped over the road closings and costly events that are closed to the public.

“My family has lived in Beijing for several generations, I have become accustomed to this,” said one commenter on social media site Weibo.com, venting concerns about pollution from the mass firework displays. “This city has sacrificed too much for politics.”