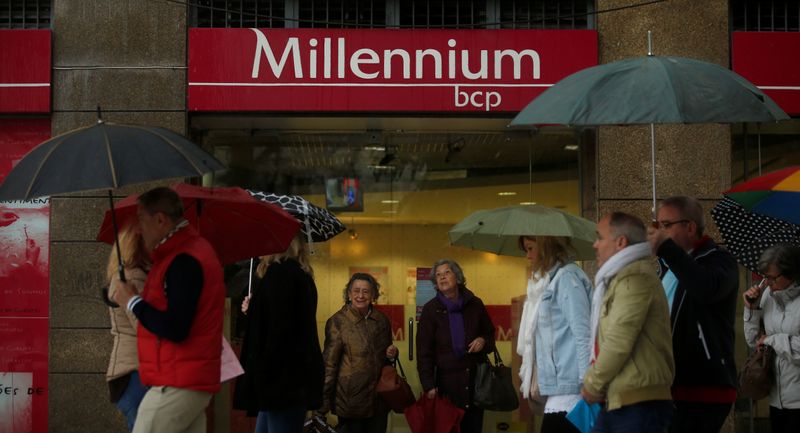 LISBON (Reuters) -Portugal’s largest listed bank Millennium bcp plans to cut operating costs and promote digital banking over the next four years, aiming to boost its return-on-equity (ROE) to 10% by 2024, the bank said on Monday.

The bank updated its strategic objectives, while reporting an 84% drop in net profit for the first half of 2021, hit by huge provisions and impairments on foreign currency loans at its Polish subsidiary and related to the COVID-19 pandemic.

It expects to reduce its cost-to-income ratio to around 40% by 2024, from 47% in 2020, serving the needs of its around six million customers increasingly through digital platforms – a trend that has been accelerated by the pandemic, it said.

Chief Executive Miguel Maya said the bank “will boost the use of technology to improve efficiency, which will be imperative in its plan”.

“We want to successfully overcome the impact of the pandemic and achieve robust levels of profitability, a 10% ROE in 2024,” he said at a press conference.

Currently, 48% of Millennium bcp’s customers already use the bank’s mobile platforms and the goal is for more than 65% to do so in 2024, Maya said.

The bank reported a profit of 12.3 million euros ($14.52 million) in the first half, down from 76 million euros during the same period last year, it said in a statement.

Loan impairments fell by 34% to around 157 million euros between April and June, compared with a year ago, but other impairments and provisions surged 167% to 304,9 million euros, the bank said.

The bank, which also has operations in Angola and Mozambique, said it aimed to achieve a fully implemented Tier 1 common equity (CET1) capital ratio – a key measure of financial strength – above 12.5% in 2024, from 11.8% in June.

(Reporting by Sergio GoncalvesEditing by Jane Merriman and Mark Potter)