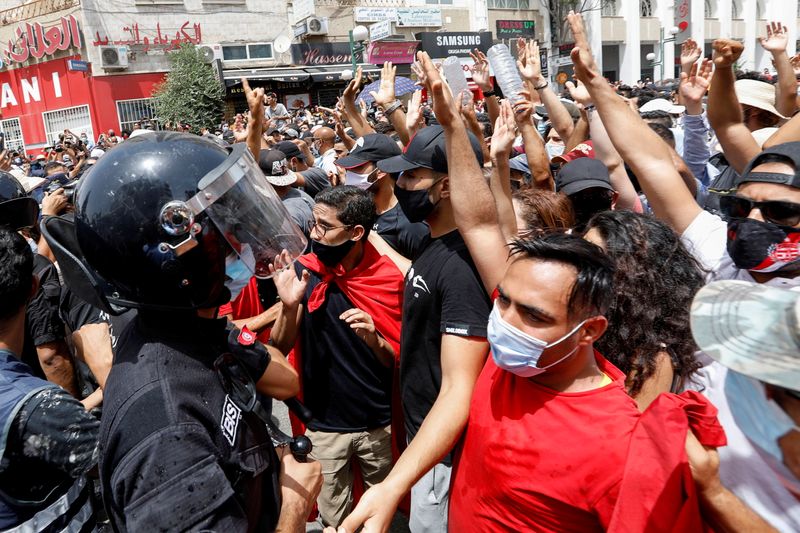 TUNIS (Reuters) – Hundreds of protesters rallied in the Tunisian capital and other cities on Sunday demanding the government step down after a spike in COVID-19 cases that has aggravated economic troubles.

The protests raise pressure on a fragile government that is enmeshed in a political struggle with President Kais Saied, who is trying to avert a looming fiscal crisis amid a weeks-long spike in COVID-19 cases and increased death rates.

The pandemic has hit Tunisia as it struggles to lift an economy that has suffered since its 2011 revolution, undermining public support for democracy as unemployment surged and state services declined.

“Our patience has run out… there are no solutions for the unemployed,” said Nourredine Selmi, 28, a jobless protester. “They cannot control the epidemic … They can’t give us vaccines.”

After a year of wrangling with Mechichi and the leader of Ennahda, Rached Ghannouchi, who is also parliament speaker, President Saied declared the army would take over the pandemic response.

Some analysts saw the move as an attempt to expand his powers beyond the foreign and military role assigned to the president in the 2014 constitution.

Government paralysis could derail efforts to negotiate an International Monetary Fund loan seen as crucial to stabilising state finances but which could also involve spending cuts that would aggravate economic pain for ordinary people.