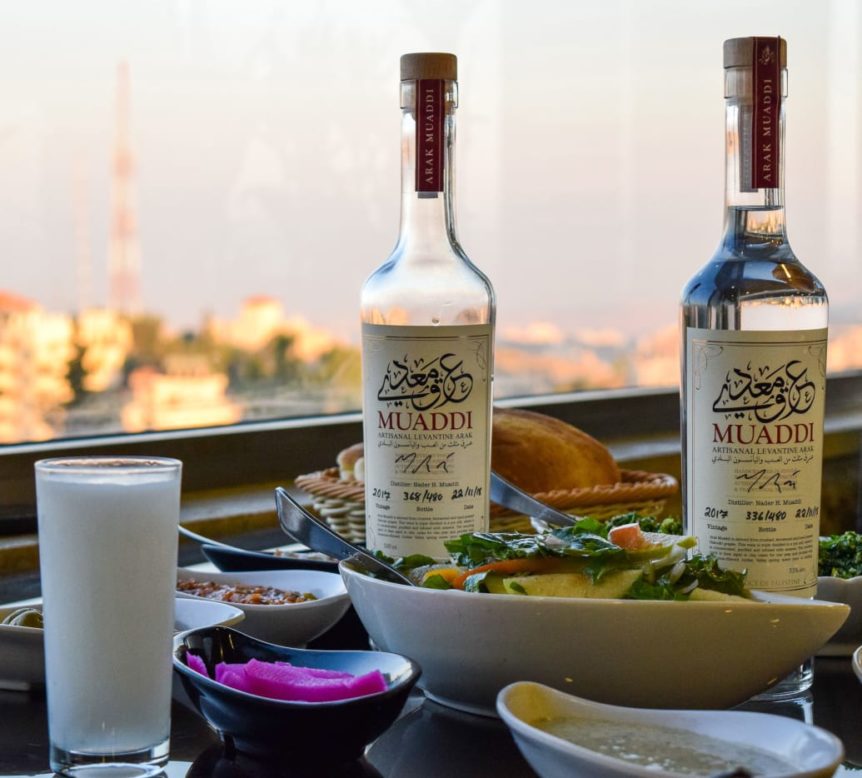 In 2007, Nader Muaddi moved from his home in Philadelphia to the West Bank to work with an organization that focused on displacement and resettlement. He’s still there—with a wife, two daughters and a new business in Beit Jala, a village just northwest of Bethlehem. It’s called Arak Muaddi, and is possibly the newest brand of what’s possibly the world’s oldest spirit.

Arak is from the Arabic word for “sweat,” which is sort of unappetizing but also accurately describes the distillation process in action. In the Middle East, arak is a form of brandy made from fermented grapes (which is to say, wine), which is infused and re-distilled with aniseed. It’s one of the first distilled spirits ever made, with roots back to the twelfth century, and is essentially the forebear of other licorice-tinged spirits that made their way around the Mediterranean, such as ouzo, raki and pastis. (Because it’s essentially the ur-liquor, in other parts of the world arak or arrack can refer to spirits made from just about anything—palm sap, rice, sugar cane—and isn’t necessarily anise flavored.)

The anise seed flavoring gives the Mediterranean form of arak a certain sweetness, and traditionally made rougher alcohol more palatable. It’s typically a drink consumed with the meal rather than before or after, and is often watered to an alcohol level not much more than wine. As with other anise spirits, diluting with water causes the solids to fall out of suspension and gives the beverage a milky opalescence.

Muaddi grew up in a Palestinian-American family outside Philadelphia, where arak imported from Lebanon was consumed copiously at get-togethers. “Anytime we have a national holiday, whether Thanksgiving, Fourth of July or Labor Day, we’d always get together and have a barbecue,” he says. “But instead of flipping burgers and hotdogs, we’d be flipping kebabs. And every mother would bring a different dish with them.” When working through 20 or 30 dishes, a sip or two of arak allowed guests to reset their palates before moving on to the next dish. “Arak is really the pillar of our culinary heritage.”

So Muaddi was disappointed when he arrived in the West Bank and found only lower-quality arak. Owing to the region’s complicated politics, imports from Jordan or Lebanon were all but impossible. And it was equally hard to procure a still—they were tightly regulated because of fears by the Israelis that they’d be used to make ingredients for explosives.

Even though some of the region’s producers had been around for a century, the lack of easy access to ingredients, combined with the region’s poverty and politics, led to a situation in which shortcuts were taken with arak production. “You have about three generations that have been separated from distillation,” Muaddi says, “and that was a craft that had been here more than a thousand years.”

The once-noble distilled spirit devolved into an inexpensive industrial alcohol flavored with anise extract. “I was surprised that I had access to better products at home in Philadelphia than I did in Palestine,” Muaddi says.

He made do by picking up a few bottles when flying through Jordan and asking friends to do the same. “It wasn’t really practical,” he says. “It was expensive, and was a good way to burn out favors from friends. I wanted to find another solution, and the most sustainable solution was to become a distiller.”

He taught himself the basics in a basement workshop, on a still he made of copper tubing and 50-liter milk kettles heated with gas flames. (“It wasn’t very safe,” he admits.) He experimented with different recipes and tried different combinations of the seven or eight local grape varietals suitable for wine.

“I went to look for people who could help me out,” Muaddi says, “and I found there’s two or three old guys, in this one village, who were still secretly making arak in their houses for personal consumption.” They helped him understand techniques and tradition, but didn’t know much about distillation or the science behind it—“they did things the way that their parents showed them.”

So Muaddi did what anyone today would do: he went to Google, and began downloading and reading as much as he could. His skills improved; in the basement, he could make about a 100 bottles a year of tasty arak that proved popular with friends and family.

And then people started offering money. After eight years of experimentation, Muaddi decided to go legit a couple of years ago. Going above board was not without complications—it took a full year and 14 permits to get the go-ahead. But soon after getting the go ahead, he replaced his milk-kettle stills with a copper 250-liter still configured much as he’d seen in a medieval manuscript with a neck that bends at a sharp angle allowing more of the heavier alcohols and denser flavors to carry over.

Arak is traditionally distilled three times—the wine is run twice through the still to raise the proof and cull out undesirable elements. What emerges is then macerated with aniseeds for 24 hours before being distilled a third time.

The arak is then rested for several months in locally made clay amphora—clay pots traditionally used for arak production in a region where oak was scarce. These vessels don’t add flavor as white oak does in whiskey barrels, but do allow for a “binding period” during which oxidation can occur and the flavors can blend and become “more harmonious,” Muaddi says. “We say here that it doesn’t age, it relaxes.”

Among Muaddi’s goals is to use time-honored, local ingredients and materials, to make a product that reflects the region’s history and makes Palestinians proud. “I wanted to make everything from the earth and from the environment, so what we’re producing can really embody our terroir.”

As has the recent outbreak of violence with Israel, which kept Muaddi homebound with his family. No one was injured and his distillery emerged intact. “It finally seems like the recent flare-up is somewhat over and things are starting to go back to ‘normal’ for the time being,” he wrote in a recent email. “However “normal” is pretty abnormal here, and oftentimes just as unbearable as the past few weeks.”

He’s kept his job doing humanitarian work, while making arak both as a calling and a side hustle. But he hopes that he can evolve this into a full-time job. This summer, he’s aiming to export to the U.S. market, targeting states with large contingents of Middle Eastern residents, including New York, California and Michigan. “Right now my documents are at the TTB” he says.

Muaddi sees a broader goal in producing locally—creating a product that adds value to agricultural lands and thus makes them more economically viable. “By doing this I’m financially incentivizing [farmers] to stay on their lands in the sensitive areas, and preventing them from falling into poverty.” Six families currently provide his grapes, and he’s anticipating expanding beyond that.