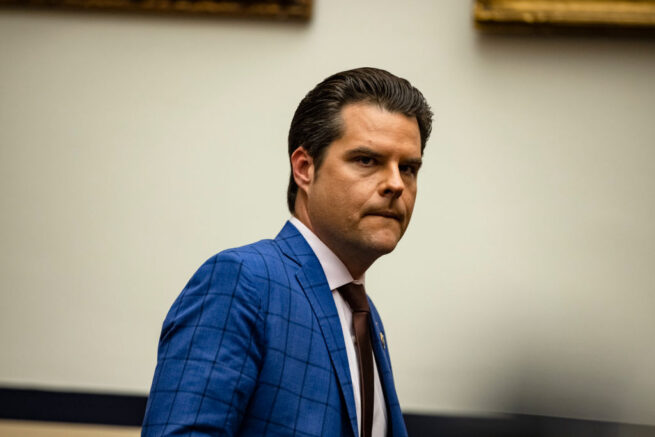 Rep. Matt Gaetz (R-Fla.) said he has no intention to resign. The Florida congressman told The Hill Friday, the rumors he plans to step down from his office “are false.”

These rumors followed reports that Gaetz is under investigation by the Department of Justice for allegedly having an inappropriate relationship with a minor and violating sex trafficking laws.

Minority Leader Kevin McCarthy said if the claims are true, he would remove Gaetz from his committee assignments. Meanwhile, House Speaker Nancy Pelosi said the Ethics Committee should probe the claims.

She also called for the removal of Gaetz amid sexual misconduct and trafficking allegations against the Republican lawmaker. Pelosi commented on the investigation into Gaetz and said he should be removed from the House Judiciary Committee despite no formal charges being brought against him.

Gaetz was accused of engaging in a sexual relationship with a 17-year-old girl and traveling with her across state lines. While he denied these claims and said the allegations stem from a bribery attempt by a federal official, Pelosi emphasized that if Gaetz is guilty his punishment would fall outside the jurisdiction of Congress.

“Matt Gaetz possesses text message screenshots, an email, and a typed document that purportedly support his claims that a federal investigation into his relationship with a 17-year-old is related to an extortion scheme against him.”https://t.co/4pXySIAVdX

“If in fact, these allegations are true, of course being removed from the Judiciary Committee is the least that could be done,” Pelosi said. “But again, I think from what we’ve heard so far, this would be a matter for the Ethics Committee.”

The Speaker’s comments came after she received criticism for allowing Rep. Eric Swalwell (D-Calif.) to remain on the House Intelligence Committee despite evidence of his long-standing relationship with a Chinese spy.

In late March, McCarthy slammed Swalwell and Pelosi’s decision to appoint him despite evidence of a clear security breach.

Mr. President, our border patrol agents are overwhelmed, and they deserve the help of their federal government. I am calling on you to put politics aside. Let’s work together for the security of our nation and the betterment of our people. https://t.co/Pxc08NJjWa

McCarthy also introduced a resolution to remove the Democratic lawmaker from the committee. He noted Swalwell has not denied the allegations against him. McCarthy also suggested Swalwell received campaign funds from China.