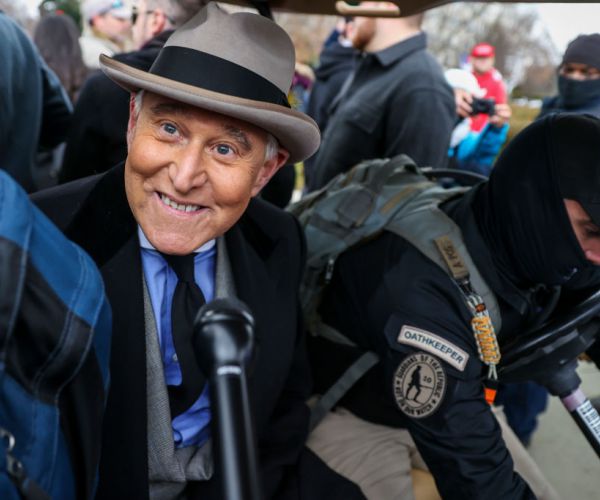 Partisan investigators and prosecutors are digging deep into former President Donald Trump’s financial records to find something they can indict him on in an attempt to distract Americans from voter fraud found in Maricopa County, Ariz., says Roger Stone.

“If they want to go after the president on fabricated charges, then we will establish this is a partisan witch hunt,” Roger Stone told InfoWars’ Alex Jones Monday.

“You show the man, I’ll show the crime,” Stone continued. “They’re allowed to root through this man’s business record of 40 years, which he built a real estate empire second to none, combing for a crime. They have no evidence of a crime.

“They have no probable cause. It is disgraceful.”

Ultimately, the partisan, weaponized prosecutorial search to nab Trump is going to be necessary to cover for the voter fraud findings that will be revealed in a few weeks from the forensic audit in Maricopa County and potentially other places, Stone told Jones.

“But I do think it is going to happen, and don’t be surprised if the announcement comes at the exact time that we learn the truth about Maricopa County, Arizona,” Stone said.

“Don’t be surprised, because I see that coming.”

Manhattan District Attorney Cyrus Vance Jr., the son of former President Jimmy Carter’s Secretary of State Cyrus Vance Sr., will be in the news soon, Stone also predicted, vowing he would be “breaking a number of stories” on Vance’s potential publican corruption.

Ultimately, Democrats need a canard, according to Stone, because the audit of Democrat-controlled areas from the 2020 presidential election will be “bubbling up.”

“Their real problem, as you can already see, are the demands for recounts of the irregularities and the anomalies in this election are bubbling up in Georgia, Wisconsin, in Michigan and other states,” Stone said.