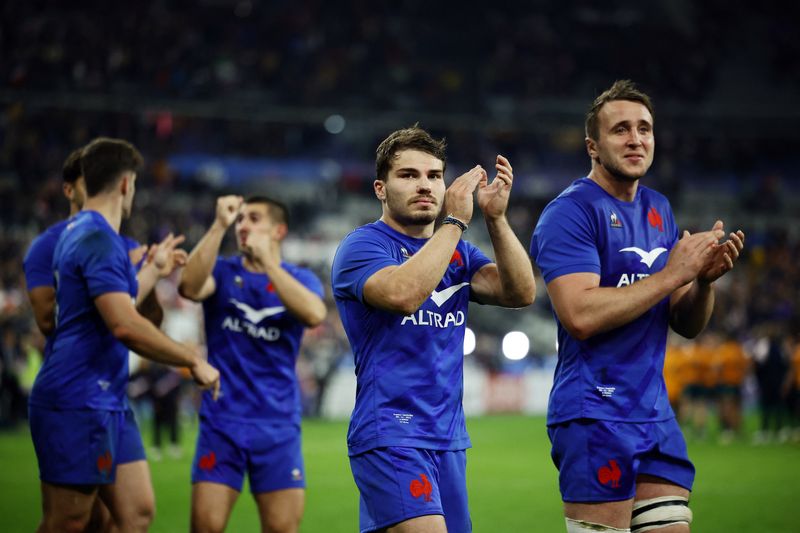 PARIS (Reuters) -France will face South Africa at Marseille’s Stade Velodrome on Saturday with the same team who edged Australia last weekend, looking to extend their unbeaten record to 12 matches.

Centre Jonathan Danty will start again after being a doubt following the birth of his child overnight on Tuesday, which saw him skip a couple of training sessions, while Yoram Moefana will again be on the wing.

“We’re very satisfied with the team who beat Australia so we’re trusting them again for Saturday,” coach Fabien Galthie told a news conference. “On Saturday we’ll be shooting first.”

France beat Australia 30-29 at the Stade de France last Saturday to stretch their winning run to 11 matches thanks to a late try by Damian Penaud.

General manager Raphael Ibanez, asked if beating the world champions would make France 2023 World Cup favourites, said: “For three years we’ve been feeling a desire from the team to stay in the world’s top three but we’re happy to leave to other nations the favourite’s tag for the World Cup, which they’d like to give us.

“South Africa are a formidable team, that’s all we can say for now.”

France were on the ropes at times again Australia but somehow pulled off the win for a huge confidence booster.

“Even when it’s hard, and against Australia we had moments where we were under huge pressure, we find solutions. South Africa is another team but we know we have these resources,” said Galthie.

“What matters is our capacity to be composed and get those winning movements like we did last Saturday.”

France finish their autumn series against Japan on Nov. 20.