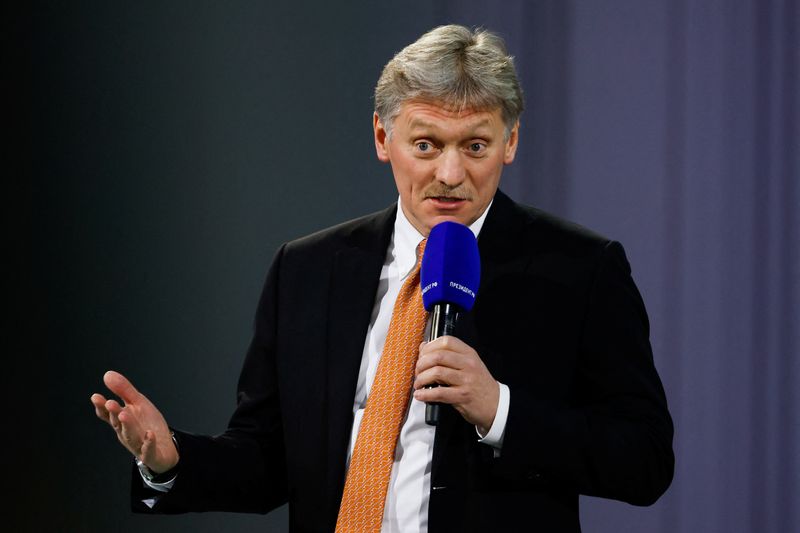 By Dmitry Antonov and Tom Balmforth

MOSCOW (Reuters) -Russia said on Thursday it was clear the United States was not willing to address its main security concerns, but kept the door open for further dialogue in their standoff over Ukraine.

Kremlin spokesman Dmitry Peskov said Moscow, which has built up its forces near Ukraine, would not rush to draw conclusions after Washington responded on Wednesday to Russian proposals for a redrawing of post-Cold War security arrangements in Europe.

Describing tensions https://www.reuters.com/world/europe/us-urges-de-escalation-over-ukraine-offers-russia-diplomatic-path-2022-01-27 in Europe as reminiscent of the Cold War, Peskov said Moscow needed time to review the U.S. written response but U.S. and NATO statements that Russia’s main demands were unacceptable did not leave much room for optimism.

“Based on what our colleagues said yesterday, it’s absolutely clear that on the main categories outlined in those draft documents… we cannot say that our thoughts have been taken into account or that a willingness has been shown to take our concerns into account,” he said. “But we won’t rush with our assessments.”

The nuanced Kremlin reaction made clear that Russia was not rejecting the U.S. and NATO responses out of hand or closing the door to diplomacy.

The Russian foreign ministry said the best way to reduce tensions was for NATO to withdraw forces from eastern Europe, but also sought to quash fears of a looming invasion.

“We have already repeatedly stated that our country does not intend to attack anyone. We consider even the thought of a war between our people to be unacceptable,” said Alexei Zaitsev, a ministry spokesman.

Russian and Ukrainian dollar bonds, which have been hammered by the crisis, rose after Peskov spoke. Russia’s dollar-denominated RTS share index rose 4%, and the rouble gained over 1% against the dollar, pulling away from a nearly 15-month low.

Though it denies planning to invade Ukraine, Russia says it wants to enforce “red lines” to protect its own security.

It presented demands in December that NATO halt any further enlargement, bar Ukraine from ever joining and pull back forces and weaponry from eastern European countries that joined the alliance after the Cold War ended.

The written U.S. and NATO responses were not made public, but both had already rejected those demands while expressing willingness to engage on other issues such as arms control, confidence-building measures and limits on the size and scope of military exercises.

Western countries have warned of economic sanctions on Russia if it invades Ukraine, building on measures imposed since 2014, when Moscow annexed Crimea and Russian-backed separatists began fighting government forces in eastern Ukraine.

Ukrainian, Russian, German and French diplomats discussed the conflict in eastern Ukraine in Paris on Wednesday and agreed more talks should be held in Berlin in two weeks.

Ukrainian President Volodymyr Zelenskiy welcomed the meeting and “its constructive nature”, and Foreign Minister Dmytro Kuleba said the agreement on more talks meant Russia was likely to remain on a diplomatic track for at least two weeks.

He said Russia’s main strategy now was to destabilise Ukraine, including by using cyber attacks, and that “a military operation is something they keep in the pocket, it’s not something they put ahead of other options”.

Russian Foreign Minister Sergei Lavrov said there was hope of starting serious dialogue with the United States, but only on secondary questions and not on fundamental ones.

“The most important question is our clear position on the unacceptability of NATO’s further eastward expansion and the deployment of strike weapons that could threaten Russian territory,” Lavrov said in comments published on his ministry’s website. He said Putin would decide Russia’s next move.

Putin, who has not spoken publicly on the crisis for weeks, has warned of an unspecified “military-technical response” – something defence analysts say could relate to missile deployments – if Russia’s demands are ignored.

He said Moscow believed Washington was preparing to deploy short and intermediate range missiles to Europe and the Asia-Pacific region.

Biden has said he will not send U.S. or allied troops to fight Russia in Ukraine but NATO has said it is putting forces on standby and reinforcing eastern Europe with more ships and fighter jets.

Four F-16 fighter jets flew to Lithuania from Denmark on Thursday, and six U.S. F-15 jets landed in nearby Estonia on Wednesday as NATO reinforced its eastern flank.