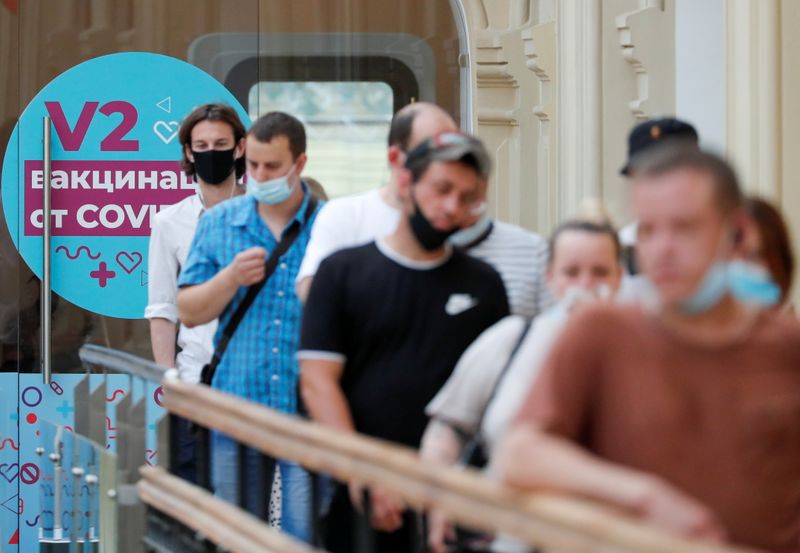 FILE PHOTO: People line up to receive vaccine against the coronavirus disease (COVID-19) outside a vaccination centre in the State Department Store, GUM, in central Moscow, Russia June 25, 2021. REUTERS/Shamil Zhumatov

MOSCOW (Reuters) – A central Russian region on Saturday suspended COVID-19 vaccinations for two days due to a shortage of doses, local officials said, as the country reported its highest daily increase in coronavirus cases since mid-January.

Russia is facing a surge in new cases that authorities blame on the highly infectious Delta variant and slow progress on vaccinating people, with deaths hitting a new record in the capital, Moscow, on Friday.

Following shortages that suspended inoculation campaigns from Friday at some centres in the Bashkiria and Khabarovsk regions, health officials in the central Udmurtia region said vaccinations would stop until Monday due to a supply crunch.

The Kremlin said the issue would be resolved in the coming days, and Prime Minister Mikhail Mishustin announced additional health spending of 25 billion roubles ($346.80 million) for the care of COVID-19 patients.

By the end of this month, 2.5 million doses of the country’s Sputnik Light single-dose vaccine will be put into circulation, he said on Saturday.

Russia reported 21,665 new COVID-19 cases on Saturday, more than a third of them in Moscow, taking the official national tally since the pandemic began to nearly 5.5 million.

The government’s coronavirus task force said 619 people had died of COVID-19-linked causes in the past 24 hours, the highest number since late December and pushing the overall death toll to 132,683.

St Petersburg, Russia’s second-largest city, saw a record daily death toll from the novel coronavirus of 107 in the past 24 hours.