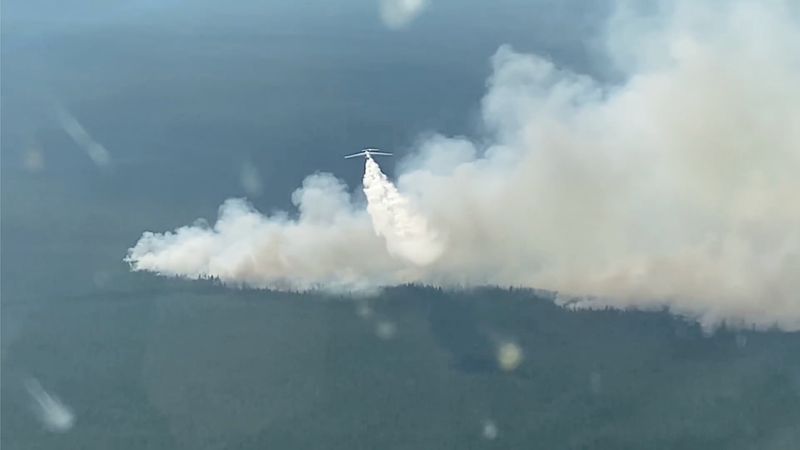 FILE PHOTO: A plane makes a water drop to fight a forest fire in the region of Yakutia in eastern Siberia, Russia, in this still image taken from video released July 14, 2021. Ministry of Defence of the Russian Federation/Handout via REUTERS

MOSCOW (Reuters) – Smoke from wildfires covered the Siberian city of Yakutsk on Sunday where people were advised by the mayor to stay home and not open windows as the region fights unprecedented blazes the Kremlin blames on climate change.

Russian military helicopters flew in firefighters earlier this week to battle the Siberian wildfires which raged across 800,000 hectares.

“I advise you to stay indoors, follow safety measures and keep windows and doors closed,” mayor Evgeny Grigoriev said in a statement. “I advise the city business managers to consider relieving the elderly and people with chronic respiratory illnesses from work until we stabilise the forest fires together.”

Fires tear through Russian forest land every year, but they have become more intense in recent seasons amid unusually high temperatures across the northern Siberian tundra.

Smoke from 187 forest fires is currently covering 51 residential areas in the Siberian Yakutia region, including its main city of Yakutsk, the local emergency ministry said in a statement. More than 2,270 firefighters are working in the area.

Operations at the local airport and navigation on the nearby Lena river are suspended on Sunday, Interfax news agency reported.