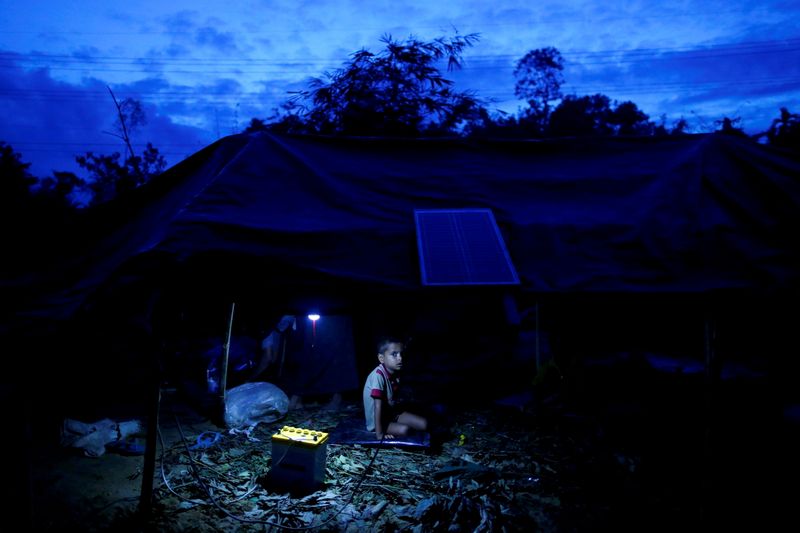 DHAKA (Reuters) -At least six Rohingya Muslims, including children, were killed and several others injured on Tuesday after heavy monsoon rains triggered landslides and flooding in refugee camps in southern Bangladesh, officials said.

Mohammad Shamsud Douza, a senior Bangladesh government official in charge of refugees, said five people died in landslides and a child was swept away by flooding after days of heavy rain.

Nearly one million Rohingya live in crowded camps in the border district of Cox’s Bazar, the world’s largest refugee settlement, after fleeing a military crackdown in neighboring Myanmar in 2017.

“I saw many terrible situations in the camps,” said Kasim, a refugee in one of the worst affected areas. “Shelters were under water, mothers were running with their children crying.”

Onno van Manen, country director of Save the Children Bangladesh, said two children were killed on Tuesday after a rain-soaked hill collapsed on top of their shelter, burying them underneath.

“On top of these deaths, the heavy rains have damaged hundreds of temporary shelters, forcing exhausted families to seek shelter in mosques and schools,” he said.

The Bangladesh weather office said it expected heavy rains to continue for the next few days.

Rohingya refugees mostly live in shacks made of bamboo and plastic sheets that cling to steep, bare hills, and flooding has further worsened their living conditions.

“Today’s severe rainfall and flooding in Cox’s Bazar shows yet again how vulnerable Rohingya refugees, and especially children, are to the impacts of climate change,” said van Manen.

“Camps like these are no place for children to live and grow up. The international community must come up with a long-term political solution.”