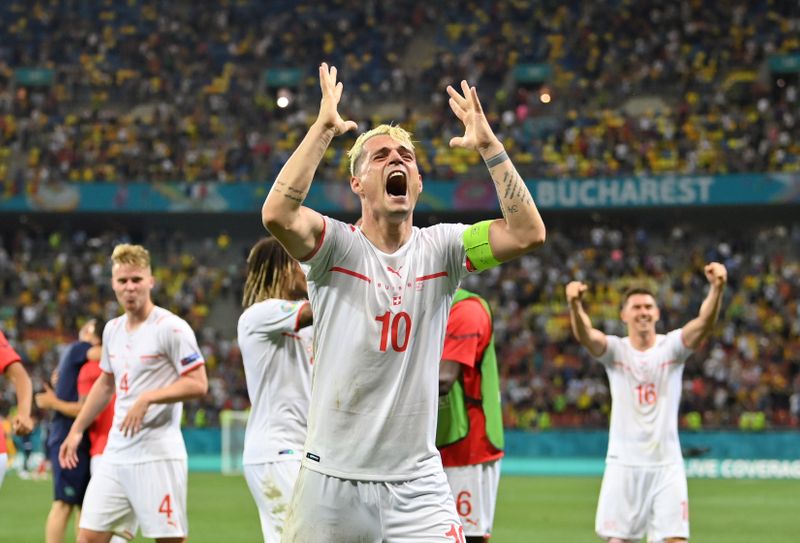 BUCHAREST (Reuters) -Switzerland’s Yann Sommer saved France striker Kylian Mbappe’s spot kick to secure a 5-4 shootout win over the world champions following a thrilling 3-3 draw after extra time on Monday, to reach the Euro 2020 quarter-finals where they will meet Spain.

It was Switzerland’s first knockout stage victory at a tournament since 1938 and the first time they have made the last eight since the 1954 World Cup which they hosted.

On a memorable evening for Swiss football, the so-called Nati repeatedly beat the odds, coming from 3-1 down with two goals in the final five minutes to force extra time and eventually penalties.

The French looked to be cruising to victory when Karim Benzema struck twice in two minutes early in the second half.

He latched on to Mbappe’s through ball in the 57th minute to cancel out Switzerland’s first half lead through Haris Seferovic’s header.

Benzema then headed home from near the goal-line two minutes later to take his tournament tally to four as France took control of the game, following a lacklustre first half, minutes after the Swiss had missed a 55th minute penalty.

Hugo Lloris saved Ricardo Rodriguez’s spot kick as the Swiss wasted the chance to take a two-goal lead in what looked like a turning point in the match.

By the time Paul Pogba scored with a sensational curled shot into the top corner in the 75th minute to make it 3-1 for France, few believed the momentum could shift once more.

But Seferovic headed in his second goal with five minutes to play and substitute Mario Gavranovic beat Lloris to snatch a 90th-minute equaliser and force the extra period after France substitute Kingsley Coman thundered a drive off the bar.

Olivier Giroud twice came close for France having come off the bench but the game was to be resolved on penalties where Sommer swatted Mbappe’s spot kick away after five Swiss players had scored to earn their first ever tournament shootout win.