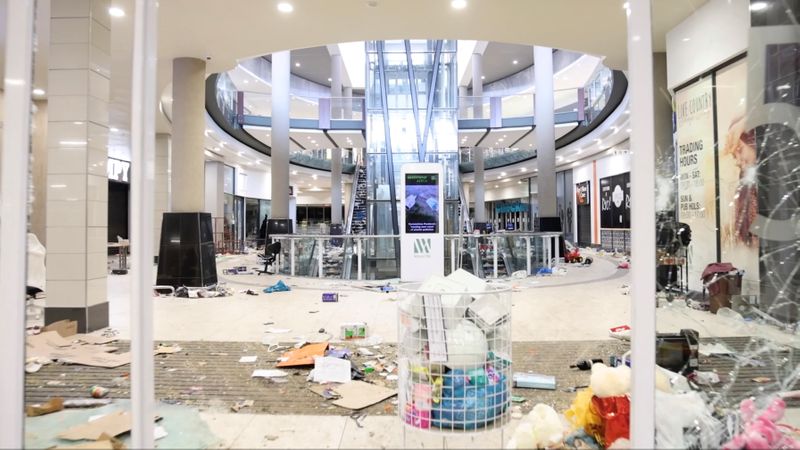 FILE PHOTO: A view shows damage inside a shopping mall following protests that have widened into looting, in Durban, South Africa July 13, 2021, in this screen grab taken from a video. Courtesy Kierran Allen/via REUTERS

JOHANNESBURG (Reuters) – Recent unrest in South Africa damaged hundreds of businesses but property developers and retailers say they remain committed to the fast-growing consumer markets of its predominantly Black townships.

Riots broke out this month after former President Jacob Zuma handed himself in to start a 15-month jail term for contempt of court.

More than 300 people died and about 3,000 stores were looted, over half of them belonging to major retailers and fast food brands.

The hardest hit areas included Durban’s uMlazi and Johannesburg’s Soweto and Alexandra townships in KwaZulu-Natal and the economic heartland of Gauteng.

Exemplar REITail had five of its 27 malls damaged, including three which are expected to take up to four months to return to normal operations, CEO Jason McCormick told Reuters.

Yet McCormick said the company remained committed to not only repairs, but the development of another 30 malls in the pipeline.

“What happened was tantamount to a black swan event. I don’t think anyone ever foresaw the extent of this ever happening,” McCormick said at one of the group’s malls in Johannesburg.

McCormick’s views reflected those expressed by six other CEOs and executives of listed property companies and two retailers interviewed by Reuters.

Vukile Property Fund, for example, will repair its damaged Daveyton Mall in Johannesburg, one of the first township malls, and will forge ahead with a 90 million rand ($6.1 million) upgrade of the site, CEO Laurence Rapp said.

“It’s one of our most successful malls in the portfolio in terms of all its trading densities and trading statistics,” Rapp said, adding that the current book value of the six damaged properties is around 2.8-3 billion rand.

Real estate developers and retailers have spent the last two decades targeting rising consumer spending by the Black middle class in areas that were disadvantaged for decades under white minority rule.

For such communities, the benefits include jobs and the convenience of having shops nearby, eliminating the cost of travelling to other towns, and these developments in turn attract other retailers and services such as banks.

Fraym, a U.S.-based company which analyses data on communities across the world, in 2019 identified South Africa’s townships as the biggest and fastest-growing retail market over the previous 10 years.

Leon Kok, chief operating officer at Redefine Properties, the second-biggest listed property firm in South Africa, said the company was committed to maintaining its presence but opening new shopping centres at this point was unlikely, not due to the unrest but rather to the pandemic’s impact on the economy.

The companies said where security and risk mitigation measures are not strong enough to fight lawlessness, they ensure that they have adequate insurance cover to manage the risk.

Arrowhead Properties’ Montclair Mall in the port city of Durban will take three to six months to be up and running, with the damage estimated at 30-50 million rand, Chief Investment Officer Alon Kirkel told Reuters.

Although the scale of the looting and damage was unexpected, Ninety One Portfolio Manager Ann-Maree Tippoo said this type of unrest was already priced in and the risk return profile of these investments were reasonably well understood by property firms.

“So the commitment to these types of assets and areas will remain because the return profile is quite astounding compared to other retail assets,” Tippoo told Reuters.

She noted the total return on township retail (including capital valuation changes) was 5.7% in 2020 versus minus 6.7% for suburban retail, citing data from the South African Property Owners Association.

Vukile’s Rapp said: “For us it’s a cost of doing business in these areas but the returns are really, really good. So therefore you accept the cost, the risk, for the return.”

Many are still assessing the extent of the damage from the violence which began on July 9 and lasted until July 15.