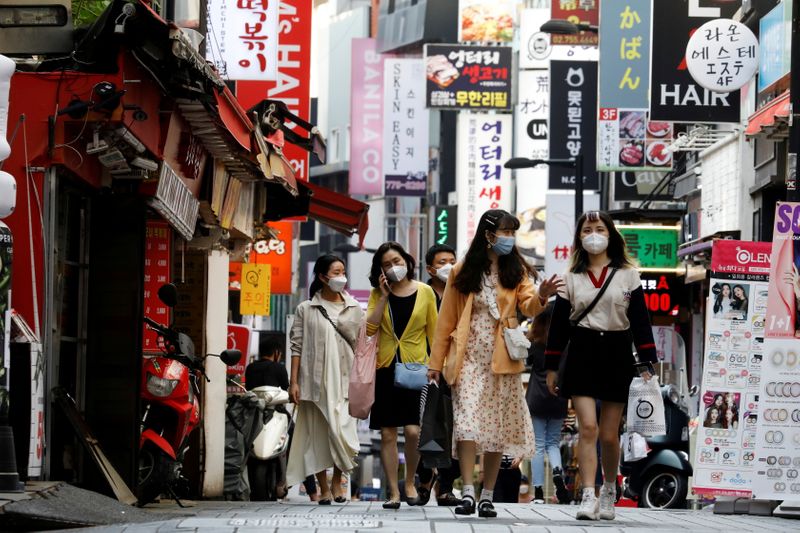 SEOUL (Reuters) – South Korea’s economy expanded at the fastest annual pace in a decade in the second quarter, thanks to a pick up in private consumption, though a resurgence of COVID-19 casts doubt over the outlook for growth for the rest of the year.

Data from the Bank of Korea on Tuesday showed gross domestic product (GDP) grew 0.7% in the second quarter, after rising 1.7% three months earlier and matching 0.7% growth tipped in a Reuters survey.

The economy surged 5.9% year-on-year, the fastest growth in a decade and up sharply from 1.9% in the first quarter, in part because of the low base effect of last year but also driven by strong exports and imports as major trading partners continued to reopen.

That, however, missed market forecast growth of 6.0% for the annual reading.

The result would be no surprise for the BOK, which is expected to be the first Asian central bank to raise interest rates from pandemic-era lows, as growth and inflation return.

But economists see the pace of growth slowing in the third quarter as the government brought in its toughest coronavirus restrictions yet to contain the worst outbreak in the country.

While exports surged 22.4% on-year, they declined 2.0% from the previous quarter and became a net drag on economic output in the second quarter, suggesting growth may plateau in the months ahead.

“We record exports in volume terms, not in terms of value, which should help explain the slight decline in exports, as export prices have been increasing quite a lot. Also, a shortage of chips for cars also dragged production,” said Park Yang-su, head of statistics department at the BOK.

SK Hynix, the world’s second-biggest memory chipmaker, on Tuesday reported the highest quarterly profit since the end of 2018, while Korean steelmaker POSCO posted its highest ever quarterly profit last week.

The main driver of growth in the second quarter was private consumption and government expenditure, which rose 3.5% and 3.9%, respectively, on-quarter.

Still, some economists are lowering their growth projection for the country.

“Given that growth was not as strong as we had expected, we are lowering our forecast for the year as a whole to 4.3%, from 5% previously,” said Alex Holmes, an economist at Capital Economics.

“We don’t think there was anything in the figures that would persuade the BOK to delay the timing of its first rate hike. We are sticking with our non-consensus view of a move in late-August.”