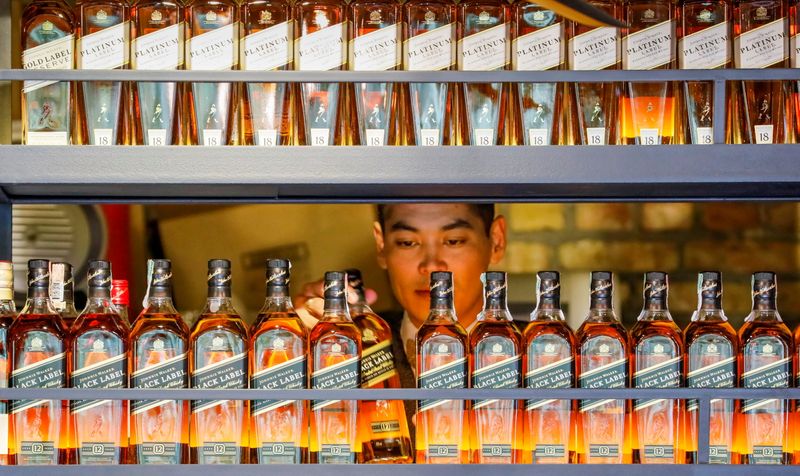 By region, North America grew the strongest boosted by consumers trading up to more premium spirits such as tequila, liqueurs and higher-end bottles of Johnnie Walker scotch.

Organic net sales rose 16% for the year ending June 30, beating the 13.7% rise analysts had expected, according to company-supplied estimates.

Diageo, whose shares slipped 0.8% in early trade, said it was raising its annual dividend by 5% to 44.59 pence per share.

The company said rising North American demand came despite its move to raise prices on its Casamigos tequila brand and Baileys liqueur, which was driven by the trend for home baking during COVID-19 lockdowns.

The company said that, with 85% of restaurants and bars in North America now open, it saw higher levels of restocking and replenishment, boosting organic net sales by 20% in the region.

In the European region, Turkey and Northern Europe were the strongest performers helped by strong demand for scotch whiskies in shops.

Sales in Africa and Asia also rose by double digit percentages, mainly due to easier comparisons to last year.

The London-listed company said it expected organic net sales momentum to continue into fiscal 2022, but with volatility in the short term.

Lavanya Chandrashekhar, who was promoted to chief financial officer in July, told reporters volatility was coming from lockdowns in markets such as India, South Africa and Indonesia, where there has been a rise in COVID-19 cases in recent months.

She said a ban on alcohol sales during lockdowns in South Africa had an impact, while retail sales to travellers had fallen as air and other global travel was dented.

(Reporting by Siddharth Cavale in Bengaluru; Editing by Sriraj Kalluvila and Edmund Blair)