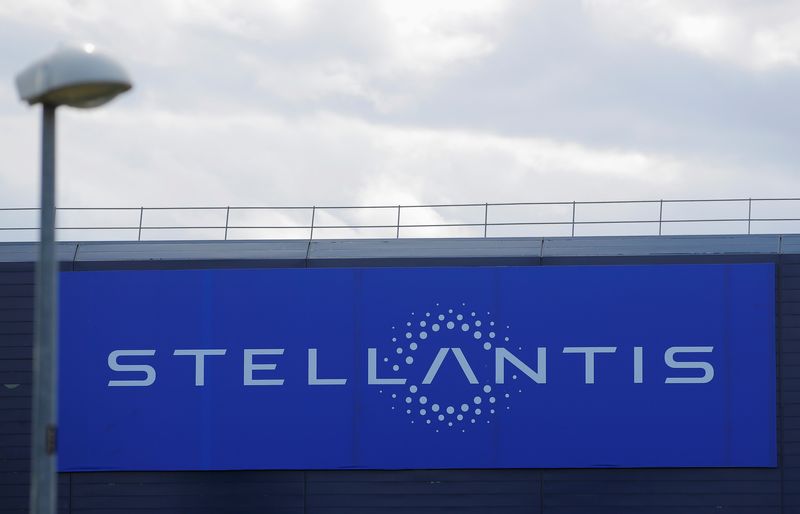 By Giulio Piovaccari and Gilles Guillaume

MILAN (Reuters) -Revenues at Stellantis rose 29% in the third quarter as improved semiconductor supplies helped to boost sales volumes, the world’s fourth-largest carmaker said in a statement on Thursday.

But while the semiconductor crunch was easing, other supply chain issues were looming for the maker of Fiat and Peugeot cars, especially around logistics in Europe.

They caused an increase in the group’s vehicle inventory stock, with Stellantis Chief Financial Officer Richard Palmer saying the industry as a whole was facing a scarcity of trucks and drivers.

“These issues have impacted our ability to convert our strong order portfolio into sales in Europe,” Palmer said presenting Stellantis third quarter revenue data to reporters.

Milan-listed shares in Stellantis were down 2.1% by 0840 GMT, in line with the European automotive stock index.

NO RED LIGHT ON ENERGY

Palmer said the company was currently seeing “no red light flashing” on possible energy constraints affecting its supply chain and that the level of concern was now lower compared to a few months ago, as “everyone is taking actions”.

“If the winter is normal, let’s say, then I think we’re reasonably confident that we can manage production without any significant interruptions,” Palmer said.

He conceded however that Stellantis “very extensive supply chain” could pose a risk.

“Small hiccups in suppliers can create big complexities for us in terms of the completion of vehicles,” he said.

Stellantis net revenues amounted to 42.1 billion euros ($41.3 billion) in the July-September period, topping analyst expectations of 40.9 billion euros, according to a Reuters poll.