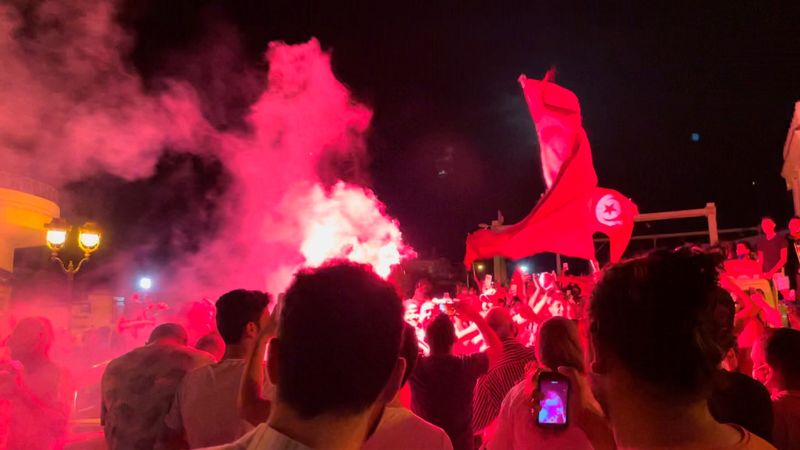 People react in the street after Tunisia’s president dismissed the government and froze parliament, in La Marsa, Tunisia, July 26, 2021 in this still image obtained from a social media video. Layli Foroudi/via REUTERS

TUNIS (Reuters) – Soon after Tunisia’s President Kais Saied said he had ousted the government, tens of thousands of people poured into city streets to applaud a move decried by his critics as a coup.

As they cheered, ululated, honked car horns and let off fireworks, Said’s supporters revelled in his decision and in the perceived downfall of the moderate Islamist Ennahda, the biggest party in parliament and his main political opponent.

It showed how a decade after Tunisia’s 2011 revolution that introduced democracy, street activism remains a potentially powerful force – and one that could lead to confrontation after Ennahda called for people to protest against Saied.

The crowds late on Sunday were defying a COVID-19 curfew as they gathered in local neighbourhoods and cities throughout the North African country and along the main Habib Bourguiba avenue in Tunis that has long served as the epicentre of any protests in the capital.

Thousands of people including many families walked along the tree-lined avenue, raising national flags, dancing and lighting red flares.

“The president was very brave… we know this is not a coup,” said Amira Abid, a woman in Tunis’ town centre as she kissed a Tunisian flag.

Soon afterwards, Saied himself arrived to meet jubilant supporters in the very street where the biggest protests took place in 2011 during a revolution whose own democratic legacy now hangs in the balance.

Saied’s critics fear his move to dismiss the government and freeze parliament is part of a shift away from democracy and a return to the autocratic rule of the past – concerns he rejected in public statements as he denied conducting a coup.

As helicopters hovered above the crowds supporting his move, the people on the streets cast Ennahda as the cause of Tunisia’s failures over the past decade to overcome political paralysis and achieve prosperity.

Nearby, as families stood with their children and raised their phones to the record the moment, a man walking with his daughter said “today is our Eid (holiday)”.