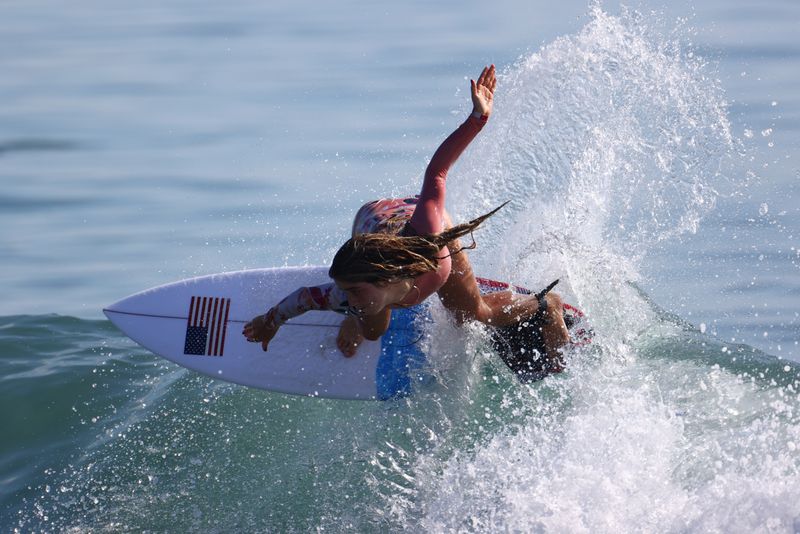 TOKYO (Reuters) – American surfer Caroline Marks eyes the Pacific Ocean carefully before expertly catching a wave and launching into a routine of slashing turns and jumps, fine-tuning her tricks ahead of surfing’s long-awaited Olympic debut on Sunday.

The campaign to have the sport included in the Games was going on long before the 19-year-old was born, and she and her fellow surfers are hoping for the big waves they need to showcase the best of their sport at Tsurigasaki Surf Beach.

“We’ve achieved a lot already, just being a part of the whole Olympic journey. For me, this is very exciting. I like the bigger names, the bigger comps, I feel it brings out the better surfer in me,” the 31-year-old added.

Famous for their laidback attitude and the camaraderie on the circuit, members of the surfing community are basking in their Olympic moment as they get to wear their nation’s colours.

“It’s huge. As soon as Fernando said that surfing was going to be in the Olympics, I knew I had a chance to qualify,” athlete Manuel Selman told Reuters, referring to the president of the International Surfing Association, Fernando Aguerre.

“It’s an honour to represent Chile and Latin America … This feels like the biggest event ever. The organising committee is incredible, we have everything an athlete could need at an event,” added the 32-year-old.

Ramzi Boukhiam was given the honour of bearing Morocco’s flag at Friday’s opening ceremony.

“I was really proud, it was really emotional to see all that and to live all that. I soaked everything in, but once that’s done, we forget. It’s a new day, fully focussed on the contest, trying to bring my best surfing to the table,” the 27-year-old told Reuters.

Outside the Olympic cordon, the Saturday morning surf schools were in full swing with fledgling surfers of all ages paddling out a few metres before attempting to get up on their boards.

Two giant screens have been set up at either end of the Olympic section of the beach, but no fans will attend due to coronavirus restrictions. Selman says their absence won’t make much difference to the competitors.

“We’re so disconnected from the crowd and that kind of pressure. We’re out in the ocean in our Zen state, yet we’re a hundred miles an hour in our head, trying to surf our best,” he said.