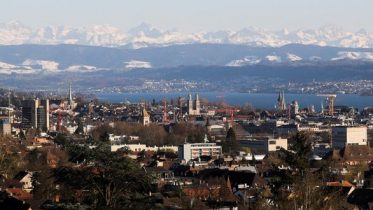 ZURICH (Reuters) -Swiss banks have criticised planned new measures designed to cool the country’s red hot property market, saying the steps were unnecessary and would do nothing to slow rising house prices.

The government said on Wednesday that from October, lenders must increase their cushion against home lending risks, sounding the alarm over one of Europe’s most expensive housing markets, where total mortgage lending has swollen to more than $1 trillion.

The plan was one of the first in Europe to cool housing markets that have been booming in recent years because of rock bottom interest rates.

The Swiss Banking Association (SBA), which represents around 300 banks in Switzerland including heavyweights UBS and Credit Suisse, opposed the obligation for banks to hold more capital against home loans.

The change distorted competition because it applied only to banks and not pension funds and insurers, which are gaining an increased share of the mortgage market, the SBA said.

“Ultimately, we don’t think it’s either necessary or effective,” said Oliver Buschan, a member of the SBA’s executive board. “People could simply go elsewhere for their loans.

“Changing the balance sheets of the banks is not going to cure the situation, if it needs curing,” he told Reuters, adding that house prices were rising because of fundamental factors like a lack of space and population growth.

“We do not consider this a bubble,” he said.

House prices have increased by more than 80% over the past 15 years, according to the Swiss National Bank. The median price for a house in Zurich has risen to 2.6 million Swiss francs ($2.79 million), while the explosion in lending has triggered fears about a damaging collapse if interest rates increased.

Switzerland experienced its last property bubble and collapse in the 1990s, when house prices plunged after rising strongly during the late 1980s.

The SBA cited the average loan to value in Switzerland as 60%.

“The whole market would have to collapse by 40% for there to be a problem with the collateralisation, and that is just not going to happen, given the fundamentals,” Buschan said.

Credit Suisse’s head of Real Estate Economics was also sceptical, saying the increased capital requirement would increase the costs only minimally for lenders and by a hardly noticeable amount for borrowers.

“It can neither eliminate nor significantly influence the causes of the strong price increases on the Swiss real estate market,” said Fredy Hasenmaile.

“Accordingly, I do not expect any weakening of the upward price trend on the Swiss real estate market as a result of the measure.”

Sweden’s financial watchdog has ordered banks to hold more capital from September to protect them against future crises, citing the upswing in housing prices and household debts.