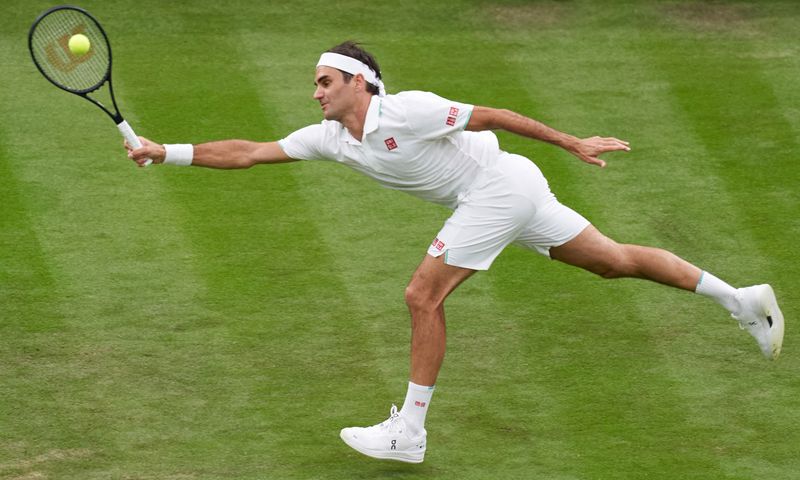 LONDON (Reuters) -Eight-times champion Roger Federer survived a massive scare against Adrian Mannarino before advancing to the Wimbledon second round on Tuesday when the Frenchman retired with a knee injury after slipping on court.

The match was poised at 6-4 6-7(3) 3-6 6-2 with Federer forcing a fifth set before Mannarino, celebrating his 33rd birthday, decided he could not continue.

“It’s awful,” Federer said in his on-court interview. “It shows that one shot can change the outcome of a match, a season, a career. I wish him all the best and I hope he recovers quickly so we see him back on the courts.

“He could have won the match at the end. Obviously, he was the better player, so I definitely got a bit lucky.”

Federer, seeded sixth, was serving with a 4-2 lead in the fourth set when the 41st-ranked Mannarino slipped while attempting a return and twisted his right knee.

The Frenchman received medical attention on Centre Court and limped back to complete the set before shaking hands with Federer, who now has a 7-0 head-to-head record against him.

“You don’t get many walkovers throughout a career and you try also not to have it happen to yourself,” Federer added. “It’s a reminder how quickly it goes. But of course, I’m obviously happy I can get another chance for another match here.

“I worked very hard and at the end I enjoyed myself out here today. It was great fun until the end, obviously.”

The 20-times Grand Slam winner came into Tuesday’s match having lost just one set in his six previous meetings against the left-hander, including three on the manicured grass at Wimbledon.

Federer started off on the wrong foot, trailing 0-40 in the opening game but managed to hold serve and soon found his groove and his nimble footwork to put Mannarino under constant pressure.

It was not until his sixth break point opportunity in the opening set that the Swiss finally managed to convert and he did it in style with a breathtaking backhand crosscourt pass.

The second set went on serve before Federer completely lost control over his forehand in the tiebreaker and four consecutive errors helped Mannarino level the match.

Federer knows the All England Club like the back of his hand but the rust from having playing only eight matches this year and missing most of 2020 after two knee surgeries started showing in his game.

After an early exchange of breaks, Mannarino got a second break in the third set as Federer started finding it difficult to land his first serves and his errors mounted.

As the Centre Court crowd started facing the prospect of Federer exiting Wimbledon in the opening round for the first time since 2002, the 20-times major champion responded by raising his game.

After saving a break point to hold his serve in the opening game of the fourth set, Federer quickly jumped out a 3-0 lead and looked the dominant player and on course to force a deciding set before his opponent’s injury.

Federer, at 39 the oldest man in the singles draw, will meet either Frenchman Richard Gasquet or Yuichi Sugita of Japan for a place in the third round.

(Reporting by Sudipto Ganguly in Mumbai; editing by Ed Osmond)