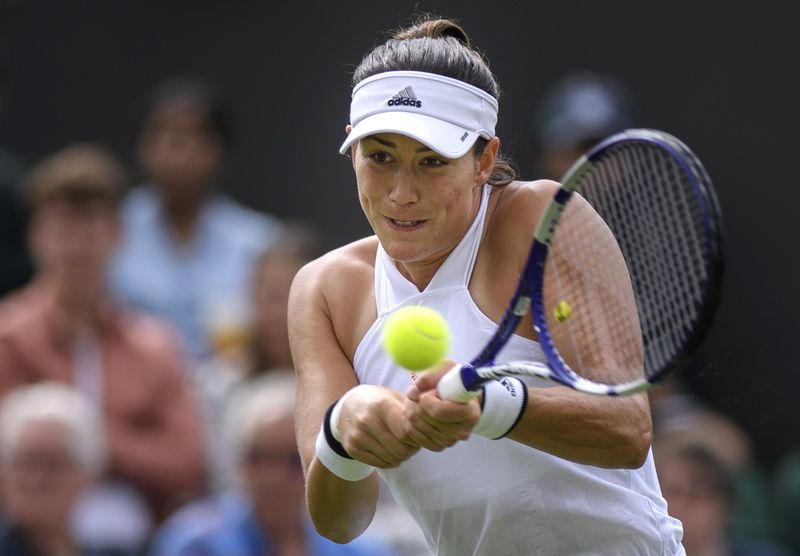 LONDON (Reuters) -Former champion Garbine Muguruza said the energy of the Wimbledon crowd fuelled her through a 6-0 6-1 defeat of Frenchwoman Fiona Ferro in the first round on Monday.

The Court Two clash was delayed by drizzle but once on court the 11th seeded Spaniard made up for lost time to march into the second round in 49 minutes.

Muguruza, champion in 2017, won the first 11 games before a netted forehand allowed Ferro to get on the scoreboard.

But it was only a brief respite as Muguruza set up a second-round tie against 174th-ranked Dutch qualifier Lesley Pattinama Kerkhove, who put out Russian former French and U.S. Open champion Svetlana Kuznetsova.

“There was a lot of crowd in the court waiting for us. I was, like, ‘Oh, wow!’” Muguruza told reporters.

“I have played a lot at the beginning of the year, and you know, all of those matches and finals on an empty court.

“Then when I stepped out today and everybody was clapping, I felt like, ‘Oh my God, this is what I missed, this feeling, this energy’. I play for the people to come and watch.

“That gives me the motivation, the strength. The bigger the stage, I feel like the more motivated I am.”

Wimbledon is operating with a 50% capacity as part of a government-approved pilot event for the safe return of crowds to events following the coronavirus pandemic.

This year’s French Open, in which Muguruza lost in the first round, was played in front of minimal crowds.

Muguruza is one of five former Wimbledon champions in the draw and while her 2017 victory, following her French Open triumph the year before, piled pressure on her broad shoulders, she now says she is calmer on court.

“I don’t feel I have to prove nothing no more,” the 27-year-old said. “I have played well here. I’m excited to be back.”