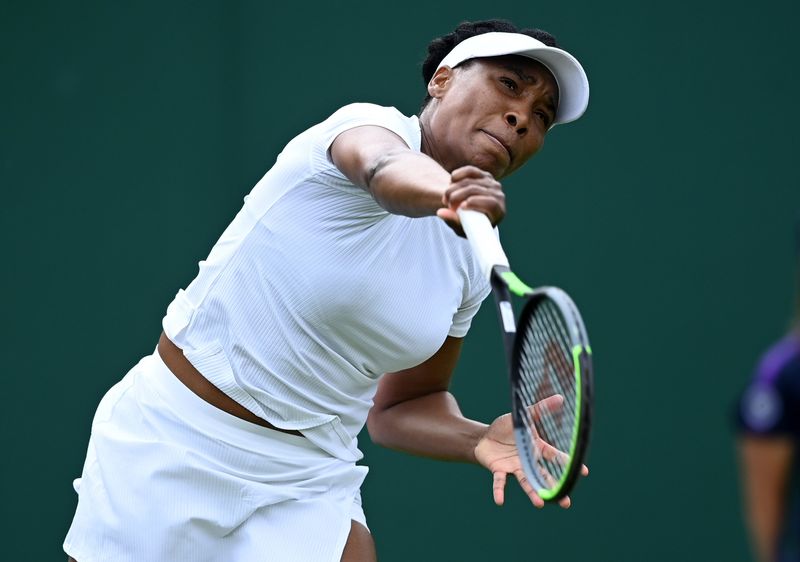 Tennis – Wimbledon – All England Lawn Tennis and Croquet Club, London, Britain – June 29, 2021 Venus Williams of the U.S. in action during her first round match against Romania’s Mihaela Buzarnescu REUTERS/Toby Melville

LONDON (Reuters) – Five-times champion Venus Williams, playing as a wildcard in her 23rd Wimbledon, showed vintage form to beat Romania’s Mihaela Buzarnescu 7-5 4-6 6-3 and reach the second round on Tuesday.

The oldest woman in the draw at 41, Williams had not won a match since reaching the second round at the Australian Open in February but showed she was far from finished on her return to a favourite place.

The Court Three clash of veterans, one of several held over due to rain on Monday, was the 271st victory of a remarkable Grand Slam career for Williams and, despite serving 10 aces, did not come easy.

The American had powered to a 5-1 lead in the final set but then wobbled as Buzarnescu, 33, saved a match point and came back to 5-3.

The Romanian failed to convert three break points in the final game, but saved another match point, before Williams made sure of victory at the third attempt.

Williams’ next opponent will be Tunisian Ons Jabeur, who beat Sweden’s Rebecca Peterson 6-2 6-1.