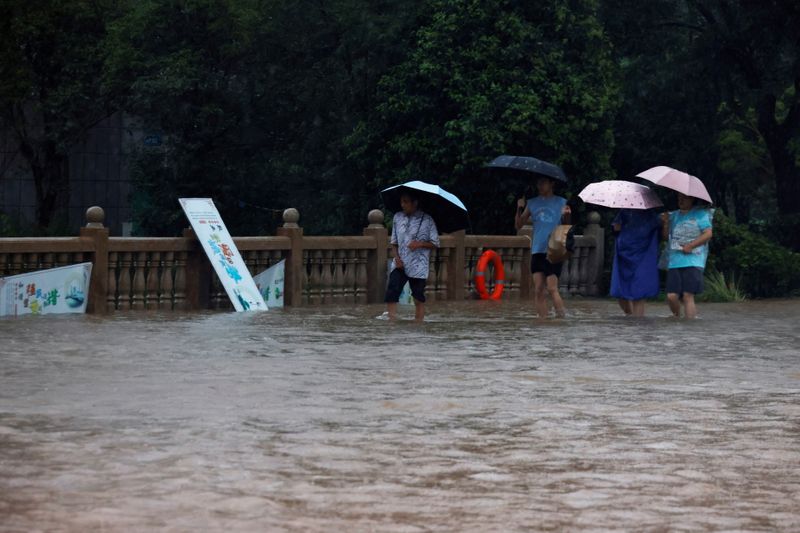 BEIJING (Reuters) -Tens of thousands of people were being evacuated from flood-hit regions of central China on Thursday as officials raised the death toll from heavy rains that have deluged Henan province for almost a week to 33 people.

The provincial weather bureau on Thursday raised the storm alert for four cities in the north of Henan – Xinxiang, Anyang, Hebi and Jiazuo – to red, the highest tier of a four-step colour-coded weather warning system.

The fatalities included 12 people who were killed when the subway in the provincial capital of Zhengzhou, about 650 km (400 miles) southwest of Beijing, was flooded earlier this week. Eight people are listed as missing across the province.

More than 73,000 people were being evacuated from the city of Anyang, on Henan’s border with Hebei province, after being swamped by more than 600 mm of rainfall since Monday, the official Xinhua news agency reported.

Xinxiang, a small city north of Zhengzhou, recorded 812 mm of rainfall between Tuesday and Thursday, shattering local meteorological records, Xinhua reported. Seven medium-sized reservoirs in the city had overflowed, affecting scores of nearby villages and towns.

As of late Wednesday, more than 470,000 people and over 55,000 hectares of crops have been affected by the Xinxiang downpours, Xinhua said, adding the local government had deployed a more than 76,000-strong search and rescue team.

In neighbouring Hebei, two people were killed when a tornado struck the city of Baoding.

The Ministry of Transport said local authorities must immediately re-examine and rectify all hidden risks on rail transit.

“They must take emergency measures such as suspending trains, evacuating passengers, and closing stations in atypical situations such as excessively intense storms,” the ministry said in a statement on Thursday.

Public scrutiny has also fallen on the timeliness of weather bulletins provided by local meteorological services.

The provincial weather bureau told state media it had issued a report warning of the coming torrential rains two days in advance.

Since Monday evening, meteorological departments from the provincial down to the county level have sent out 120 million text messages to mobile phone users warning them of the storms, the Henan weather bureau said.