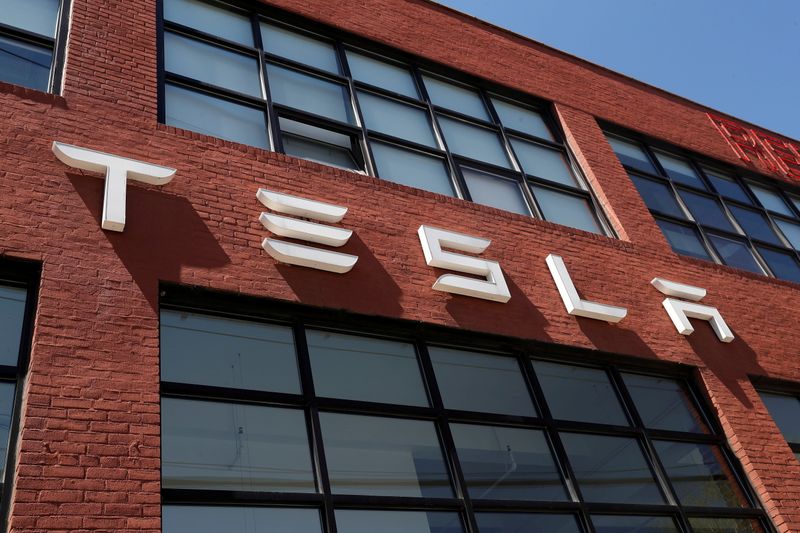 FILE PHOTO: The TESLA logo is seen outside a dealership in the Brooklyn borough of New York City, U.S., April 26, 2021. REUTERS/Shannon Stapleton/File Photo

Shares of the world’s most valuable automaker were up 1.3% in extended trade.

The company said it expected to launch production this year of Model Y SUV in Texas and Germany, but would delay the launch of the Semi until 2022. Still, despite the pandemic and the supply chain crisis that have marred the auto industry, Tesla posted record deliveries during the quarter, thanks to sales of cheaper models including Model 3 sedans and Model Y crossovers.

The carmaker, led by billionaire entrepreneur Elon Musk, said revenue jumped to $11.96 billion from $6.04 billion a year earlier, when its U.S. factory was shut down for more than six weeks due to local lockdown orders aimed at curbing the spread of the coronavirus.

Analysts had expected revenue of about $11.3 billion, according to IBES data from Refinitiv.

Excluding items, Tesla posted a profit of $1.45 per share, easily topping analyst expectations for a profit of 98 cents per share.

Tesla said it is “on track to build our first Model Y vehicles in Berlin and Austin in 2021.” But it said it has delayed the launch of the Semi truck program to 2022,”to better focus on these factories, and due to the limited availability of battery cells and global supply chain challenges.”

(Reporting by Akanksha Rana in Bengaluru and Hyunjoo Jin in Berkeley, Calif; Editing by Maju Samuel and David Gregorio)