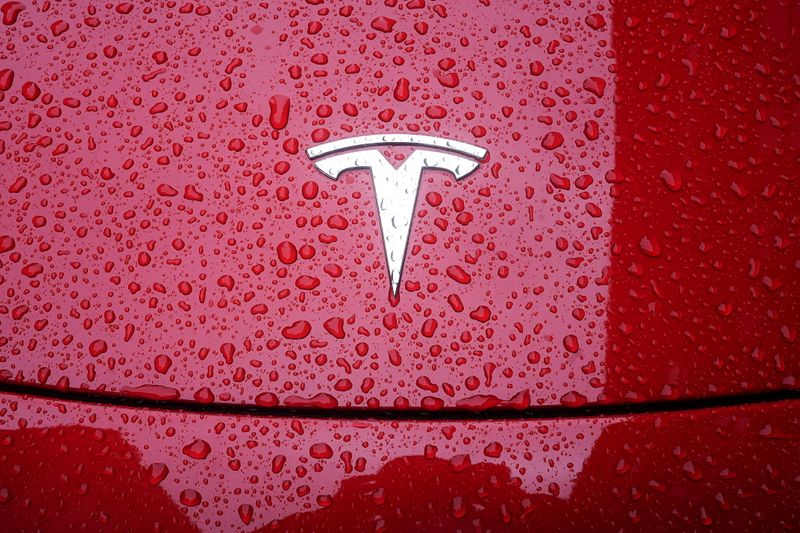 FILE PHOTO: A Tesla logo is pictured on a car in the rain in the Manhattan borough of New York City, New York, U.S., May 5, 2021. REUTERS/Carlo Allegri

(Refiles to correct name in paragraph 3 to Elon Musk)

NEW DELHI (Reuters) -Tesla Inc has written to Indian ministries seeking a big reduction in import duties on electric vehicles (EVs), a move it says will boost demand and generate revenue for the government, two sources with knowledge of the matter said.

Its pitch, however, is likely to face resistance from Prime Minister Narendra Modi’s administration which has championed high import taxes for many industries in a bid to boost local manufacturing.

“We want to do so, but import duties are the highest in the world by far of any large country,” Tesla Chief Executive Officer Elon Musk said on Twitter, in reply to a tweet about launching the company’s cars in India. (https://bit.ly/2WfUrEw)

“But we are hopeful that there will be at least a temporary tariff relief for electric vehicles,” Musk added.

Other luxury automakers in India have also lobbied the government in the past to lower taxes on imported cars but have had little success due to opposition from rivals with domestic operations.

Tesla, which aims to begin sales in India this year, said in a letter to ministries and the country’s leading think-tank Niti Aayog that slashing federal taxes on imports of fully assembled electric cars to 40% would be more appropriate, according to the sources.

“The argument is that at 40% import duty, electric cars can become more affordable but the threshold is still high enough to compel companies to manufacture locally if demand picks up,” one of the sources said. The sources declined to be identified as the letter has not been made public.

Niti Aayog did not respond to an email seeking comment. Ministries that Tesla wrote to included the transport and heavy industries ministries, which did not immediately respond to a request for comment.

The Indian market for premium EVs, indeed for electric cars in general, is still very much in its infancy with vehicles far too costly for the average consumer and very little charging infrastructure in place.

Daimler’s Mercedes Benz began selling its EQC luxury EV in India last year for $136,000, and Audi launched three electric SUVs this week with sticker tags that begin at around $133,000.

While lower duties would give Tesla a better chance to test the market, its plan to begin sales in India does not hinge on a change in government policy, both sources said.

Tesla registered a local company in India in January and has ramped up local hiring while also scouting for showroom space.

India’s transport minister Nitin Gadkari told Reuters in March that India would be willing to offer incentives to ensure Tesla’s cost of production in the country is less than that in China, but only if it manufactures locally.