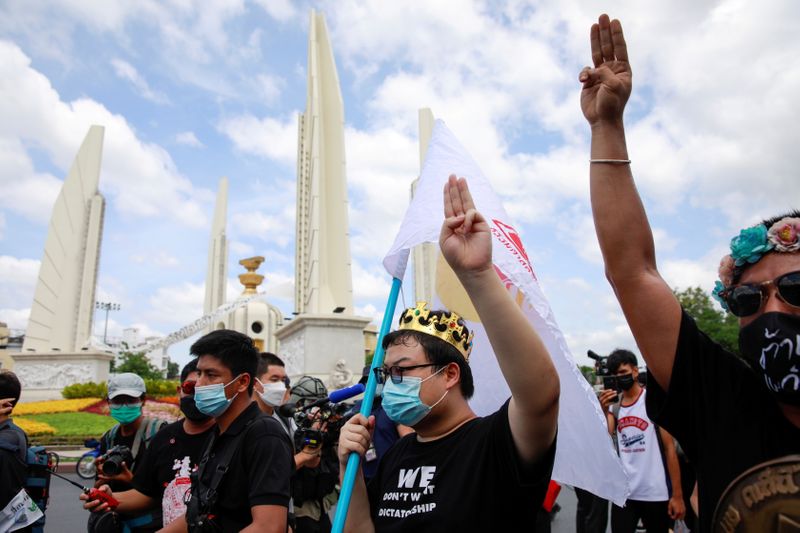 Protest leader Parit “Penguin” Chiwarak (with crown) shows the three-finger salute during a demonstration to mark the 89th anniversary of the abolition of absolute monarchy in Bangkok, Thailand, June 24, 2021. REUTERS/Soe Zeya Tun

BANGKOK (Reuters) – Hundreds of Thai pro-democracy protesters took to the streets on Thursday, calling for the resignation of Prime Minister Prayuth Chan-ocha and constitutional changes that would curb the influence of the country’s powerful monarchy.

The rally, which defied a ban on public gatherings due to the pandemic, comes as Prayuth’s government faces public criticism over its handling of coronavirus outbreaks, a slow economic recovery and a vaccine policy that involves a company owned by King Maha Vajiralongkorn.

“The constitution must come from the people,” protest leader, Jatupat “Pai Daodin” Boonpattararaksa, told the crowd in the capital Bangkok.

Youth-led demonstrations last year attracted hundreds of thousands of people across the country, but they stalled after security forces began cracking down on rallies, detaining protest leaders and after new waves of COVID-19 infections broke out.

Protesters had broken traditional taboos by criticising the king, risking prosecution under a strict lese majeste law that makes insulting or defaming the king, queen, heir and regent punishable by up to 15 years in prison. Most of the protest leaders have been released on bail.

In March, several dozen were injured when police fired water cannon, tear gas and rubber bullets to disperse a protest.

Thursday’s rally, which also included some former Prayuth supporters, marks the day when Thailand declared an end to absolute monarchy on June 24, 1932.

“In 89 years since the end of absolutism we have not got anywhere,” Jatupat said.

About 2,500 police officers had been deployed to maintain order, said the deputy head of Bangkok police, Piya Tavichai.

“A gathering at this time in not appropriate because it could lead to further spread of the virus.”