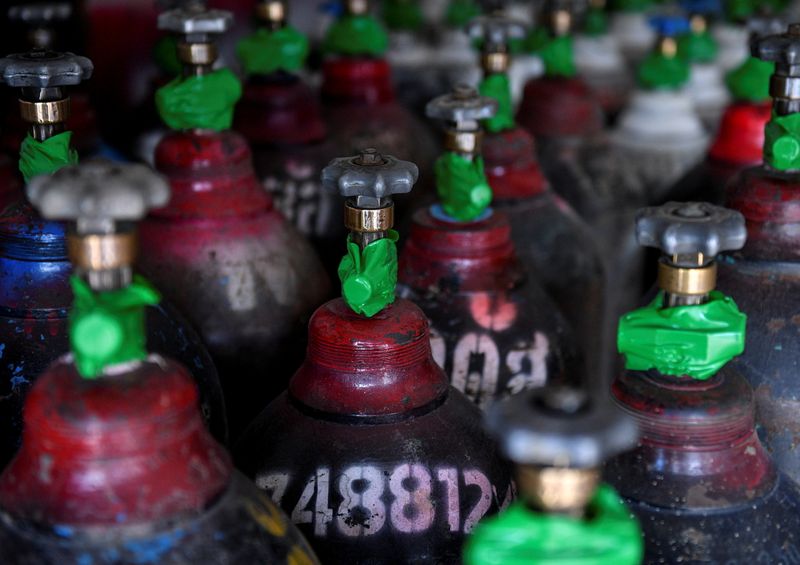 Oxygen cylinders are seen at a store as demand for oxygen continues to grow amid the coronavirus disease (COVID-19) pandemic, in Bangkok, Thailand, July 17, 2021. REUTERS/Chalinee Thirasupa

BANGKOK (Reuters) – Thailand on Sunday announced an expansion of coronavirus restrictions that include travel curbs, mall closures and a night-time curfew to three more provinces after the country reported a third consecutive day of record case numbers.

The country reported 11,397 infections and 101 deaths on Sunday, bringing the cumulative total to 403,386 cases and 3,341 fatalities, the vast majority from an outbreak since early April that is being fuelled by the highly transmissible Alpha and Delta COVID-19 variants.

Shopping malls will be closed and a 9 p.m. to 4 a.m. curfew will be imposed from Tuesday onwards in Chonburi, Ayutthaya and Chachoengsao provinces, an announcement on the official Royal Gazette on Sunday showed.

Bangkok and nine other provinces have already been under these restrictions, the toughest in more than a year, since last Monday, as the country battles its longest-running and most severe outbreak so far.

The government earlier said it was planning to introduce more restrictions on movement as the surging number of cases, which continue to rise despite the partial lockdowns in high risk areas, had stretched healthcare capacity and health officials warned that the severe outbreak could continue for months.