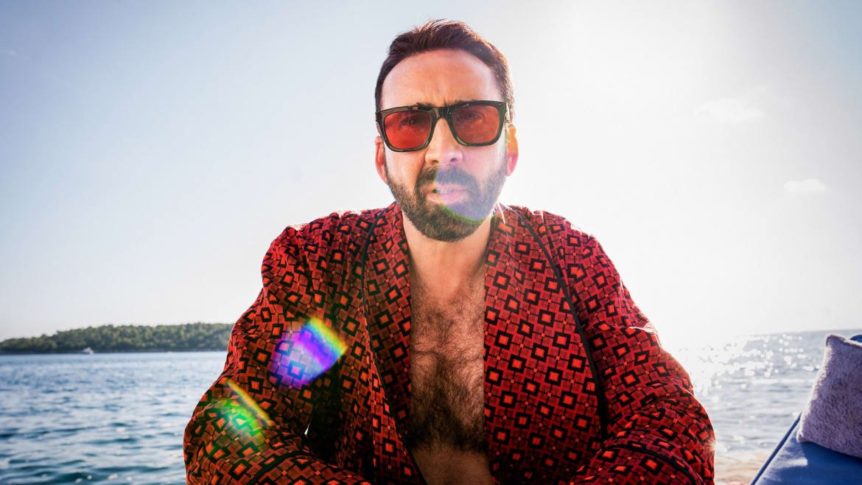 Nicolas Cage not only starred in the film National Treasure—he is one.

Over his 40-plus years as an actor, Cage, a nephew of legendary filmmaker Francis Ford Coppola and actress Talia Shire, has earned a reputation for manic, pedal-to-the-metal performances in every conceivable film genre, from horror (Mandy) and comedy (Raising Arizona) to action (Face/Off, The Rock) and drama (Leaving Las Vegas, which got him a Best Actor Oscar). The 58-year-old has also evolved into a cult hero for his off-screen exploits, including blowing a $150 million fortune on castles, rare art, a two-headed snake, and a rare T-Rex skull, among other things, sentencing him to a decade of direct-to-video fare that was by and large beneath his considerable talent (he finally settled his debts last year).

The Unbearable Weight of Massive Talent is the apotheosis of Cage’s cultural capital. In the film, now playing in theaters, he stars as a more down-in-the-dumps version of himself, largely estranged from his teenage daughter and deeply in debt. In order to settle a $600,000 hotel bill, Cage agrees to a $1 million offer to attend the birthday party of a superfan of his (Pedro Pascal) in Spain. When the CIA catches wind of the trip, they convince Cage to spy on his admirer, who may or may not be a powerful drug lord masterminding a political coup.