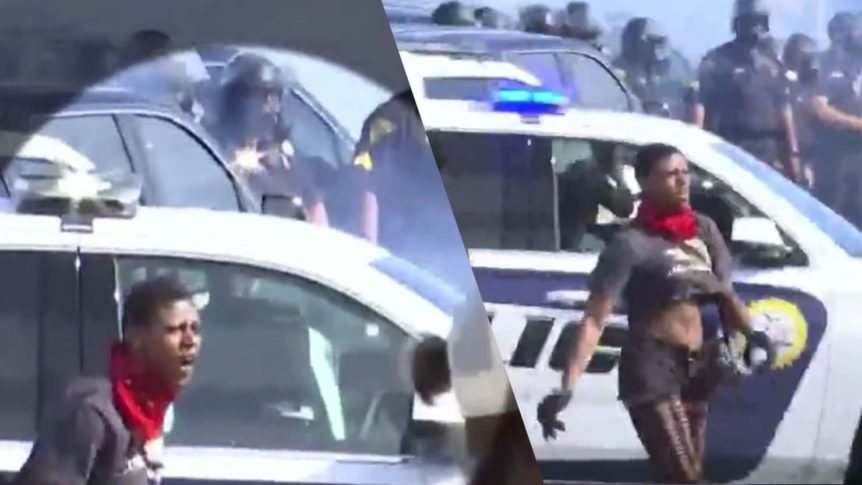 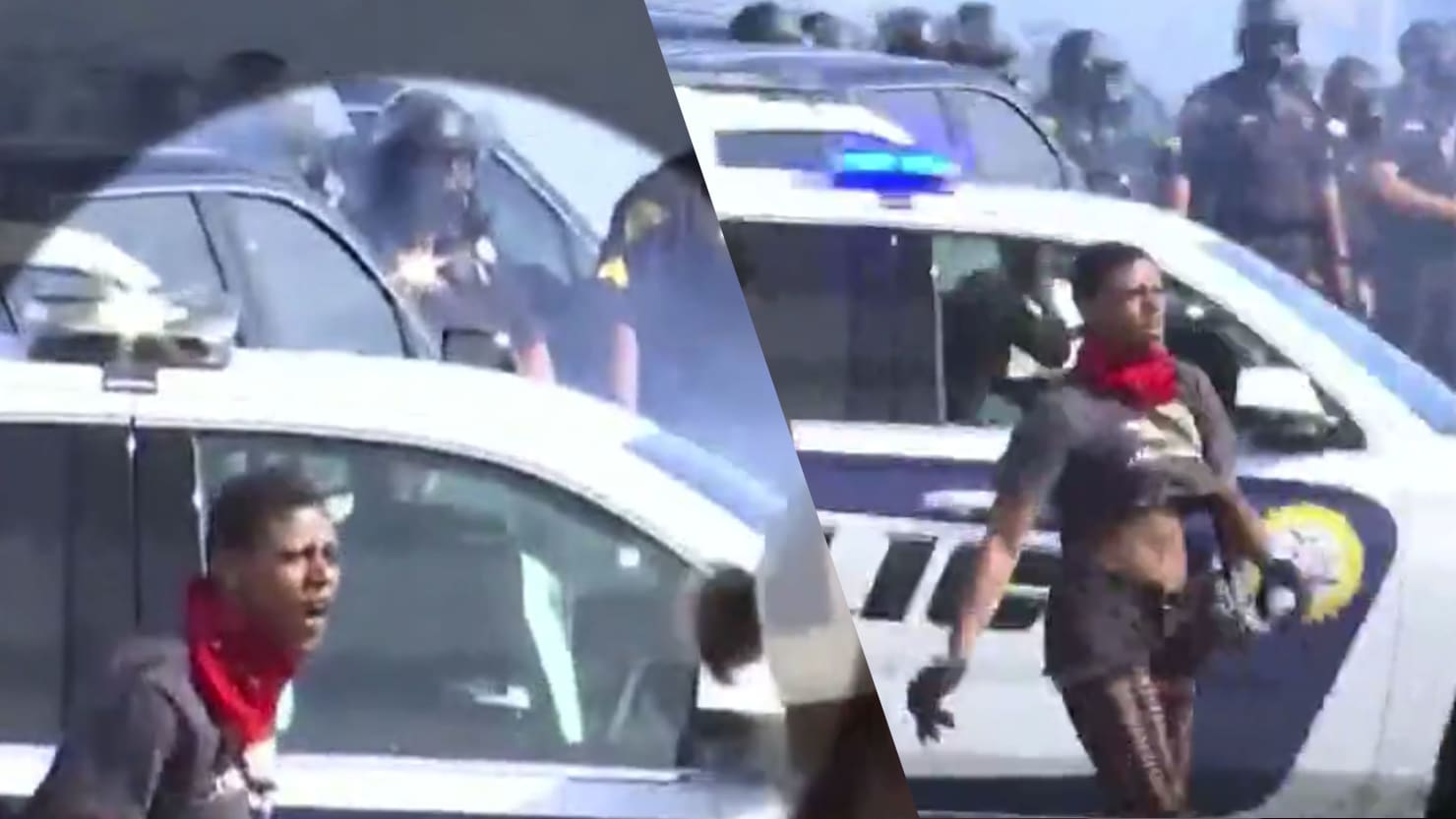 Months after leaving office in the wake of his failed insurrection, Donald Trump just won a major victory in his battle against the Black Lives Matter movement with the conviction of a racial justice demonstrator for a minor act of vandalism.

On May 18, Tia Deyon Pugh was found guilty of a felony in a federal court for breaking the window of an unoccupied police car during a Mobile, Alabama, protest held in the wake of George Floyd’s murder last summer. Pugh’s conduct amounted, at most, to a misdemeanor under municipal law; but she was convicted under an, until recently, rarely invoked, and segregationist-inspired, law making it a federal crime to “interfere” with a police officer during a “civil disorder.” Even the jury that convicted Pugh, a Black woman, seems to have recognized that she was overcharged, and implored the judge to “show compassion regarding sentencing.”

The obvious question is why the Justice Department under Attorney General Merrick Garland has continued to pursue such a patently unjust criminal case. The obvious answer appears to lie in cases the DOJ has brought against insurrectionists who stormed the Capital on Jan. 6, many of whom have been charged under the same statute as Pugh. By continuing to pursue an unjust case against a Black Lives Matter activist, the DOJ may have been attempting to demonstrate that its charges against the violent insurrectionists are not the product of ideological bias. But it’s hard to see how that justifies the injustice to an undeserving defendant.

The charges against Pugh, first brought during 2020, were the product of a massive Trump administration effort to substantiate the false claims of Trump and his supporters that antifa and the Black Lives Matter movement were parties to a massive, criminal conspiracy to undermine the social order.

As part of that “law and order” offensive, Homeland Securities Department operatives in unmarked vans snatched people off the streets of Portland, in the midst of demonstrations there, and then interrogated them in an effort to gain intelligence regarding the massive anarchist-inspired conspiracy imagined by government officials. Then-Attorney General William Barr was an avid participant in the conspiracizing; Barr memorably joined Trump in suggesting that antifa’s imagined leaders sent individuals from throughout the country to Washington, D.C., “for the specific purpose of starting a riot” in September 2020. That, never substantiated, claim later took on a cruel irony, given Trump’s own role in calling thousands of incipient insurrectionists to the nation’s capital months later.

While Trump and Barr failed to provide any evidence to support their conspiracy theories against BLM and antifa protesters, they nonetheless used the full weight of federal law enforcement against those protesters. Barr was particularly intent on employing federal “anti-riot” laws that had been inserted, curiously enough, in a 1968 civil rights law by segregationist members of Congress. The laws include a statute making it illegal to cross state lines to incite a riot or conspire to do so. That much-maligned law formed the basis for the convictions (later overturned) of the Chicago Seven, and—until recently—was used only in the rarest of cases, including against violent white supremacist terrorists. But Barr began deploying it again.

The statute Pugh was charged under, making it a felony to interfere with police or firefighters during a “civil disturbance,” was also drafted (and inserted into the same 1968 bill), by segregationist legislators. It was likewise rarely used until last summer, when Barr’s DOJ charged a number of defendants in Portland, as well racial justice protesters around the country, under the statute, including (as in Pugh’s case), sometimes for conduct that would have amounted, at most, to low-level crimes under normally applicable state and local laws.

In the wake of late summer’s racial justice protests, the DOJ deployed FBI agents, apparently with a direction to make federal criminal cases by any means necessary, preferably by use of the 1968 “anti-riot” laws. Many of those charged were in Portland, where—unlike in most cities—often-violent protests persisted for weeks. But Barr’s DOJ was not content to charge only the most violent protesters in Portland; rather, in an effort to substantiate Barr’s and Trump’s claim that there was a nationwide conspiracy, they went from city to city seeking to bring charges against BLM protesters. Pugh was an unlucky victim of that “law enforcement” effort.

Pugh, a young woman without a criminal record, was charged with a misdemeanor offense by the Mobile police department after she broke the window of an empty police car during a May 31, 2020 Black Lives Matter protest. But after Pugh gave a statement in a police station admitting to her conduct, FBI agents showed up and, after assuring Pugh that she was not facing any new charges, duped her into giving a second, videotaped confession that was, unbeknownst to Pugh, directed at causing her to admit to the elements of the federal crime, including by duping her into “admitting” to obstructing or interfering with “interstate commerce” (the alleged crime occurred on the on ramp to an interstate freeway). Pugh was then taken into federal custody and charged with the crime she was ultimately convicted of, which carries with it the possibility of a prison sentence as long as five years.

“There are good reasons for questioning the DOJ’s use of the vague 1968 anti-riot laws against any defendants, regardless of their ideologies or conduct.”

Similar charges were brought against alleged participants in the Portland protests, many arising from conduct far more serious that that attributed to Pugh. But, following Trump’s exit from office, the DOJ has chosen to show leniency to many of those charged. While this has brought howls of protest from Fox News, and is certainly at odds with the prosecutorial policies of Trump and Barr, it is entirely consistent with longstanding DOJ policies. For example, well-established DOJ pretrial diversion guidelines give U.S. attorneys discretion to divert low-level offenders to supervision by the probation department in lieu of seeking jail terms.

Pugh, presumably like many of those charged in Portland, met all of the criteria for such pretrial diversion. Furthermore, as her counsel demonstrated in briefing seeking dismissal of her case, the statute under which she was charged is gravely tainted by its segregationist history, and of questionable constitutionality. It is more than a bit troubling that a statute written by segregationists who hoped to see it used against civil rights demonstrators in the 1960s is being used against civil rights demonstrators in the 21st century.

But the DOJ would not even consider pretrial diversion for Pugh, even after the Trump-era U.S. Attorney in Mobile left office. To the contrary, the Department sent a prosecutor from D.C. to assist local prosecutors in pursuing the charges against her. That seems inexplicable, until one considers a recent development.

Now some of the insurrectionists facing such felony charges are asserting some of the same constitutional challenges to the rarely used statutes that have been raised by defendants in Portland, and by Pugh.

Additionally, many of the insurrectionists, including some of their defenders in the GOP, argue that the Biden DOJ has singled them out by imposing aggressive charges for ideological reasons. When one considers this allegation, the DOJ’s decision to pursue a patently unjust case against Pugh begins to make sense—the Department likely recognized that continuing to pursue such charges against a BLM protester could blunt claims of bias by defendants who participated in the storming of the Capital. But understanding the DOJ’s likely rationale does not make it any more defensible.

Indeed, there are good reasons for questioning the DOJ’s use of the vague 1968 anti-riot laws against any defendants, regardless of their ideologies or conduct. Anyone who engaged in violent or otherwise serious misconduct on Jan. 6 (as well as during any of the protests last summer) almost certainly violated other criminal laws that provide sufficient bases for appropriately serious charges. Accordingly, there is no need for the DOJ under Merrick Garland to follow Barr’s strategy of resuscitating tainted, segregationist-inspired laws.

Furthermore, it is not only indefensible but indeed immoral to unjustly pursue felony charges against a person like Tia Pugh, who did not engage in a remotely serious crime, in order to bolster the argument for pursuing similar charges against violent insurrectionists.

The jury that convicted Tia Pugh seems to have recognized the problem, as they requested the judge to “show compassion,” even as they found her guilty of the broadly, and vaguely, defined offense of interfering with the police.

Hopefully, the judge, Terry F. Moorer, will see the wisdom of the jury’s plea and won’t send Pugh to prison. But even if she avoids spending time in jail for a single minor act of vandalism, Pugh will carry the burden of a felony conviction for the rest of her life unless her conviction is overturned on appeal. That is a heavy weight for a person who engaged in minor acts of vandalism during a civil rights protest to carry in order to justify the DOJ’s use of deeply problematic prosecutorial tools against the Jan. 6 insurrectionists. Understandably, Pugh broke out in tears when the verdict was read.

There is every reason to believe that the DOJ may choose to continue to pursue other such cases against some of last summer’s protesters, and for the same problematic reasons. The DOJ and its new attorney general should reconsider this course.