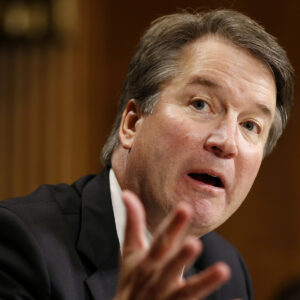 On Thursday, the New York Times published a report that the FBI received 4,500 tips during the supplemental background investigation of then-Supreme Court nominee Brett Kavanaugh in 2018 and sent the most “relevant” tips to the Office of White House Counsel (which had requested the follow-up investigation).

“The letter left uncertain whether the FBI itself followed up on the most compelling leads,” the Times reported. But the Times failed to report that summaries of all 4,500 tips were available for review by all 100 U.S. senators:

Mike Davis, who served as chief counsel for nominations on the Senate Judiciary Committee during the Kavanaugh hearings, tells National Review that there was a summary of all 4,500 tips in the FBI’s report, which was available to all 100 U.S. senators.

“They printed out the entire tip-line summary,” says Davis. “Every senator had full access to read those things if they wanted to.”

Davis makes a crucial point about Senate Democrats now expressing outrage: “If there was anything that caught their attention, they could have flagged it for further investigation.”

“Every whack-job in the world called into that thing. That’s why there were 4,500 [tips],” says Davis. “Grassley’s team went through the entire tip-line. It was nonsense.” Davis worked under then-chairman Chuck Grassley on the committee and now runs the Article 3 Project, a conservative group that focuses on the judiciary.

A Republican senator who reviewed the FBI’s report confirms Davis’s description of the tip-line summary. “There was nothing in there . . . nothing anywhere providing a shred of corroboration” of an existing allegation or a new allegation, the senator tells National Review.

“It’s very clear what happened to the tips,” a former senior White House official told National Review’s Jack Crowe. “Everyone knows what happened. I don’t know why the Times is pretending they don’t. Everything we got, we gave to the Senate. There’s no secret file.”

As I noted in my piece, there was a bipartisan agreement that the supplemental one-week background investigation was supposed to be limited to “current” and “credible” allegations, and there’s good reason to believe there were no new credible allegations of wrongdoing. The press has had three years to investigate any new tips that Democratic senators may have found credible, but they’ve come up empty.

The interviews conducted by the FBI during the supplemental background investigation in 2018 actually cast serious doubt on the allegations made by Christine Blasey Ford:

Christine Blasey Ford claimed that her best friend from high school, Leland Keyser, was with her at the small gathering where Blasey Ford was allegedly assaulted by Kavanaugh. Keyser publicly said she didn’t recall the party or ever meeting Kavanaugh. But in speaking to the FBI during the supplemental investigation, she went a step further, casting serious doubt on Blasey Ford’s story.

“I don’t have any confidence in [Blasey Ford’s] story,” Keyser said to Kelly and Pogrebin, who interviewed her for their book. The details of the allegation “just didn’t make any sense,” Keyser said.