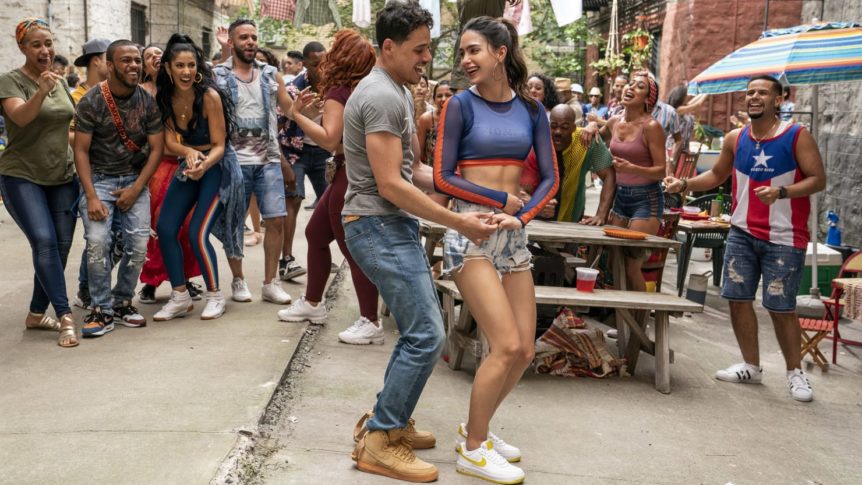 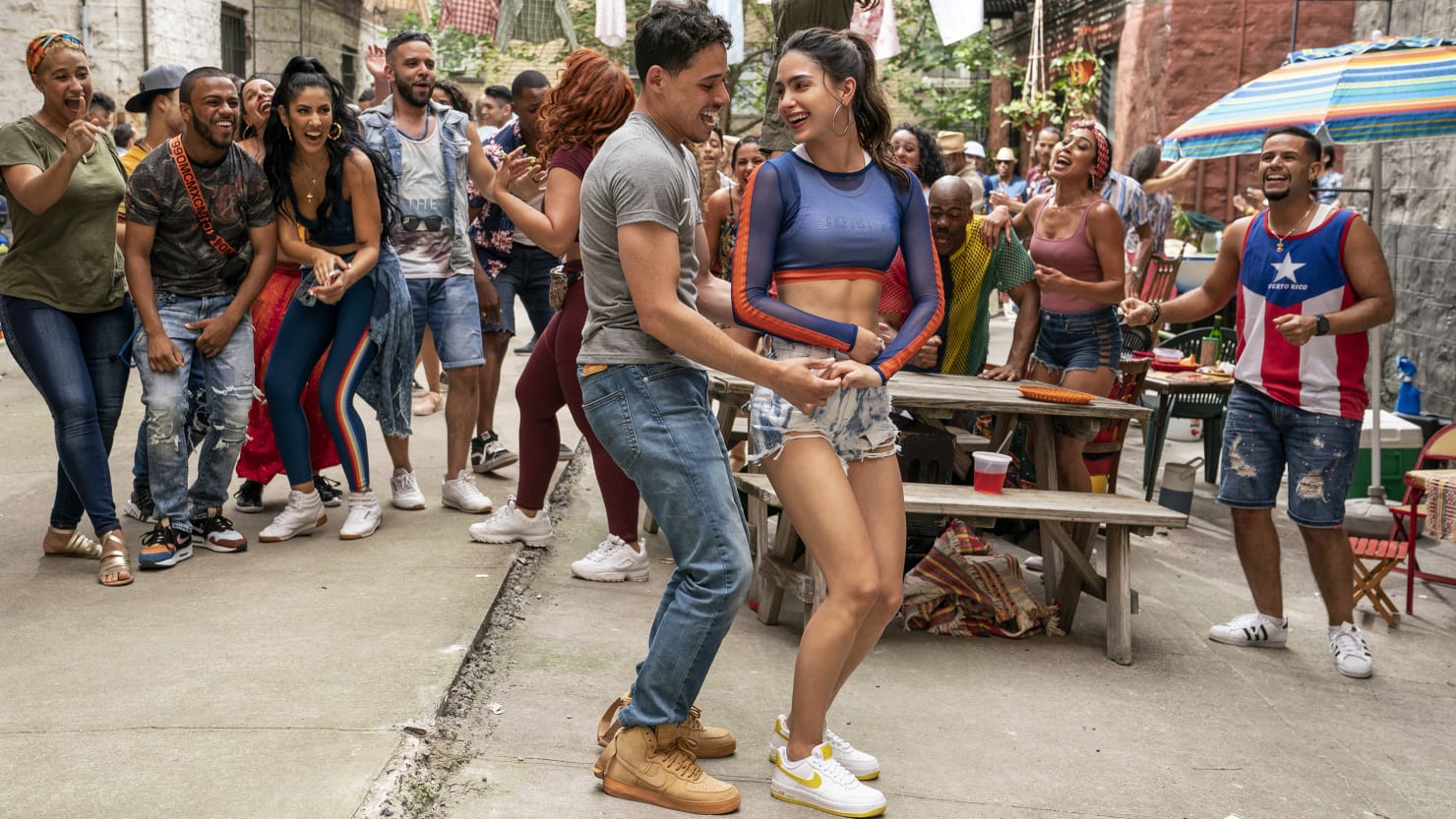 In the Heights may be the greatest movie musical in decades—so it is staggering to realize that it is actually adapted from the second-most famous thing Lin-Manuel Miranda created.

The Hamilton multihyphenate (writer, star, Pulitzer Prize-winner, cultural ubique) first broke big on Broadway with his 2008 Tony-winning musical In the Heights. It heralded Miranda as a mold-shattering Broadway bard, a fresh talent who has helped usher in a mainstream boom in musical theater.

A big test of just how big that boom could be comes this weekend when the big-screen adaptation of In the Heights, directed by Crazy Rich Asians’ Jon M. Chu, hits theaters and streams on HBO Max.

The reviews have been rapturous, and if word of mouth doesn’t turn this movie into a blockbuster hit, I will have lost all faith in the moviegoing public. In fact, the buzz surrounding the film is so good and its vision is so specific that it’s tempting to wonder if it might earn all-time status as far as movie musicals go. In an age exhausted from internet hyperbole, that may actually be a reasonable leap.

Unlike Hamilton, so transcendent on stage that a straightforward filming of the original Broadway cast was sufficient to keep its superfans “satisfied,” the cinematic adaptation of In the Heights excavates new treasures from the already ebullient production.

Chu’s vivacious staging of the musical numbers throughout New York City manages that magical thing of transporting you to another world while harnessing so much familiar emotion that you never feel closer to home. The surrealism whisks you away, but you’re never far from the feelings and relationships that pulse through the universe you know—all while shining a radiant spotlight on a community you might not.

The show’s score is its own ecstatic adrenaline shot. There are earworms that could double as self-refilling serotonin boosters, while other songs are heart-splitting epiphanies about love, grief, community, and pride. In this movie treatment, they all wash over you, and then into you. There’s no rival to the full-body sensory experience of a live musical, which makes it all the more remarkable when a creative team is able to not just mimic that, but enrich it on screen.

The story centers around Usnavi, in a performance from lead Anthony Ramos that isn’t so much starmaking as it is a showcase for his constellation of talents. He raps, he sings, he dances. He’s sexy as hell. He’s a tour de force commanding the screen; one flash of his charming grin could trigger seismic activity. But he also brings quiet dignity to a conflicted immigrant’s experience.

Usnavi is torn between the life he’s built in his Washington Heights community and the life he left behind as a child in the Dominican Republic.

Is he thriving in New York City, getting by on the miracle of a surrogate family: Abuela Claudia (Olga Merediz), the community’s mother figure; Sonny (Gregory Diaz IV), whom he ribs like an older brother and invests in like a father; and lifelong friends like Benny (Corey Hawkins), Nina (Leslie Grace), and Vanessa (Melissa Barrera)? Or is he being bruised by all the obstacles erected to trip Latinx dreamers who are sprinting toward a better life—in which case a return to the Dominican Republic could mean a chance to heal, to breathe again?

I can’t tell you what a pleasure it is to take in a movie musical with a full cast of actors who can actually sing the score. And not just serviceably—with the “hair on the back of your neck stands up” confidence and pathos. There’s an insecurity that underlies the impulse to star-cast these adaptations. What that reflex always miscalculates is what makes a star; a Vanity Fair magazine cover for a miscast A-lister is no replacement for a newly discovered talent blowing audiences away.

Buoyed by veterans seizing showcases they’re too often deprived in projects on this scale—Daphne Rubin-Vega’s (Rent’s original Mimi) electric performance chief among them—the whole thing builds to a volcanic eruption of emotion. Joy, desperation, dreams, the celebration of culture, the importance of family: It all spews at a nearly constant clip, along with your tears.

I’ve said before that there is a point about 45 minutes into the film when things get so overwhelming that I started weeping, and then never stopped. But it’s not just the scenes of heartbreak or loss that get to you. The pride in community, family, and heritage is so powerful that, like the best movie musicals, the screen barely contains the emotion. Your heart doesn’t stand a chance.

It’s an exhilarating and torturous time for movie musical fans. After a decades-long drought that was satiated with only the occasional droplets—Chicago, Moulin Rouge!, the scattered Disney animated musical—the dam has broken.

A flood of musicals have hit cinemas and streaming services in recent years: The Prom, La La Land, The Greatest Showman, Into the Woods, Cats, Mary Poppins Returns, Jingle Jangle, Aladdin, and Mamma Mia! Here We Go Again, to name a few. But now that theaters across the country are reopening following a year-plus of pandemic closures, the summer is kicking off what’s already been dubbed the “Year of the Movie Musical.”

In the Heights is opening this weekend, and hot on its heels in 2021 are at least three other major movie musicals: adaptations of Dear Evan Hansen, Everybody’s Talking About Jamie, and West Side Story. It doesn’t have an official release date yet, but Tick, Tick…Boom!, which is directed by Miranda, could also score a 2021 release date.

If you love musical theater in all forms, including when it makes the leap from stage to screen, this watershed should be a thrill. But in jumping for joy, we may also have flown too close to the sun. Too often, fans have been burned by bad casting, uninspired staging, and point of views that kill the spirit of the original productions.

When you look back at the greatest movie musicals of all time—whether for you that means West Side Story, Cabaret, or even something that’s pure, cheesy fun like Grease—it’s hard to articulate the unspeakable somethingness that elevates them above the rest. So often, lately, movie creatives seem not only apathetic about trying to capture it, but ignorant that such an it factor even existed in the first place. Is it artistic cynicism? Is it the assumption that the source material could speak for itself? Whatever it is, it’s too often disappointing.

“Chu’s vivacious staging of the musical numbers throughout New York City manages that magical thing of transporting you to another world while harnessing so much familiar emotion that you never feel closer to home.”

It’s impossible to extricate any movie musical from the pangs of Old Hollywood nostalgia, which can be a liability for ambitious creatives whose attempts at innovating the form can crash land as gimmicky (the snot-bubble belting in those Les Misérables close-ups), manic (the seizured cinematography of The Prom), pandering (the base-level ugliness of The Greatest Showman), or downright poisonous in its taste (everything that is happening in Cats).

Something like La La Land succeeds when it masquerades an imitation of that classic form as an homage. On the easiest level, a film like Mamma Mia! Here We Go Again at least makes up for cheesy material with an unbridled, unabashed spirit and confidence in tone. But these things shouldn’t be easy. That’s what makes In the Heights work so well. As was mentioned in the Entertainment Weekly review of the film, it’s “a Technicolor marvel as heady as Old Hollywood, and as modern as this moment.”

The “96,000” number is jaw-dropping. Staged entirely in a pool with some of the most athletic choreography committed to screen, it nods to Busby Berkley and MGM classics as well as Bollywood and the Step It Up films. At another point in the film, Benny and Nina dance up the side of the building. “No Me Diga,” an all-female number set in a beauty salon, is as infectious a production as the medium has ever achieved.

Every big number blends today’s technological possibility with the old-fashioned marvel of watching the world’s most talented performers dance in unbroken shots. Sometimes, if the choreography and cinematography were not so immersive, you could almost believe there is an actual proscenium like you’d see on Broadway.

More, this is a film that has the courage to hang its climax on “Paciencia y Fe,” a ballad about history, responsibility, and ambition performed by Abuela Claudia. The pivotal number lends crucial emotional context to the last act of the film. When “Carnaval Del Barrio” rolls around near the finale, its radiance is so practically blinding that your instinct should be to look away. It’s like staring at a cinematic solar eclipse.

To make an argument that this is the best movie musical in years, there needs to be a benchmark. But that’s something so relative that, even for me, it changes by the day.

Some would say In the Heights is the best since La La Land; I absolutely would not. So what is it? Is it the best movie musical since the solidly entertaining 2007 adaptation of Hairspray? The more artistically adventurous, classier choice of 2006’s Dreamgirls? Or do you go with Chicago (2002), which has its own detractors? In which case, you’re stretching back to a quirkier choice like Little Shop of Horrors, or even further to the turn-of-the-’80s stretch that produced Grease, The Wiz, Fame, and All That Jazz.

But maybe the comparison of “best since…” isn’t apt because what In the Heights is doing feels so revolutionary and singular. That’s not to say it’s the best movie musical of all time, though it’s certainly among the top of the modern era.

What sets it apart is that it seems like a turning point, the lightning in the bottle that happens when a creative team understands the material, is inspired by the medium, and marries those two key elements into something that we haven’t seen, or felt, before.