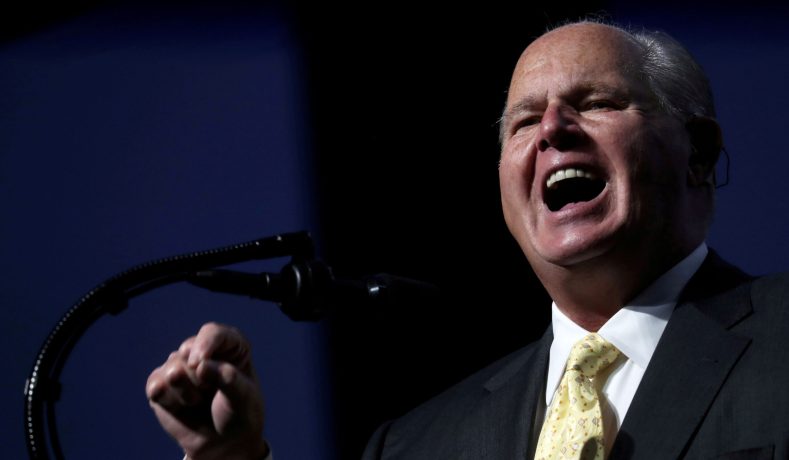 Like Alexander the Great or Genghis Khan, Rush Limbaugh created an empire too large to be left uncontested to a single heir upon his death. Today, we have news of how it will be divided. Rush’s distributor will replace him with a duo of younger hosts:

Clay Travis and Buck Sexton will take over his three-hour conservative talk radio show time slot, said distributor Premiere Networks [which] hopes the younger voices will bring something new to talk radio, while also continuing on in Mr. Limbaugh’s legacy. The program, slated to begin airing June 21, will be called “The Clay Travis & Buck Sexton Show.” It is expected to air around the country, from noon to 3 p.m. ET, on hundreds of stations. . . . Mr. Travis, 42 years old, is a sports journalist, lawyer, TV analyst and founder of sports website Outkick.com. Since 2016 he’s hosted “Outkick the Coverage With Clay Travis” on Fox Sports Radio. . . . Mr. Sexton, 39, is a radio host and political commentator who has served as an officer with the Central Intelligence Agency and a New York Police Department counterterrorism expert. His three-hour weekday evening talk show, “The Buck Sexton Show”—formerly “America Now”—is syndicated to over 180 stations by Premiere. . . . Mr. Sexton is a regular on Fox News as a national security analyst, and was previously national security editor for The Blaze. Mr. Sexton pointed to their different backgrounds and younger ages as a boon for the show. “The most dominant talk radio hosts have been from one generation; Clay and I represent the next phase. We’re going to bring the perspective of two guys who see a country they’re deeply worried about, and a massive audience that needs people who will speak for them,” he said.

Rush himself, of course, was 37 when he launched his show. But Travis & Sexton will not have the field to themselves. My old RedState colleague and friend Erick Erickson (who turns 46 in June) will be moving into the same 12–3 time slot as a nationally syndicated radio show three weeks before they launch:

Cox Media Group (“CMG”) and Erick Erickson today announced syndication of The Erick Erickson show, featuring the top-rated host on Atlanta’s 95.5 WSB Radio. Erickson’s nationally syndicated program will be available Monday-Friday, 12pm-3pm ET, beginning June 1, 2021. Erickson, who is also a nationally syndicated columnist, has been a mainstay on 95.5 WSB for a decade. He is consistently one of the most listened to local hosts in the country and has the ear of conservative leaders across the nation. “I’ve been working towards this for a very long time, and I appreciate my long relationship with CMG. We look forward to continued success at 95.5 WSB and many new affiliates across the country,” said Erickson.

Time will tell, as with ancient Rome, which half of the empire endures longer. In the meantime, there is always room in conservative media for competition among distinct voices. Congratulations to all involved, and let the games begin.