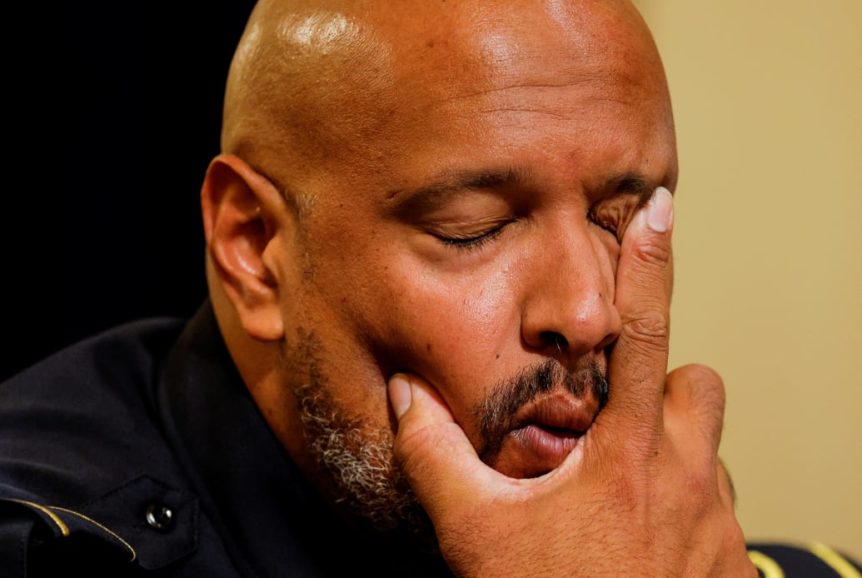 As he attempted to prevent a mob from breaching the Capitol on Jan. 6, U.S. Capitol Police Sgt. Aquilino Gonell at one point didn’t think he would make it out alive.

“I could feel myself losing oxygen and recall thinking to myself, ‘This is how I’m going to die, defending this entrance,’” Gonell testified Tuesday morning before the Jan. 6 bipartisan House Select Committee.

Gonell said he later found out that his wife and relatives had been watching the riot unfold on television, and were frantically calling and texting him to find out if he was okay. But, he explained, his priority was attending to others.

“After giving CPR to one of the rioters who breached the Capitol, in an effort to save her life, I finally had a chance to let my own family know that I was alive,” said Gonell.

Arriving home at nearly 4 a.m. the next day, Gonell said his wife tried to hug him but he pushed her away because his uniform was saturated with pepper spray. He took a shower, but it reactivated the chemicals he had been sprayed with and his skin was burning.

“I finally fell asleep two hours later, completely physically, mentally exhausted,” said Gonell. “Yet by eight o’clock a.m., I was already on my way back to the Capitol.”

Gonell said the physical violence he and his fellow officers experienced “was horrific and devastating,” adding that they were punched, sprayed with chemical irritants, and “even blinded with eye damaging lasers by a violent mob who apparently saw us, law enforcement officers dedicated to ironically protecting them as U.S. citizens, as an impediment to their attempted insurrection.”

In addition to Gonell, three other police officers who were there that day showed up to testify before the committee: Capitol Police Officer Harry Dunn and D.C. Metropolitan Police Officers Daniel Hodges and Michael Fanone. All four sat silently as committee chairman Rep. Bennie Thompson (D-MS) played a video montage for the chamber of that day’s violence. Some looked away and appeared physically pained by reliving the moment. Others wiped tears from their faces as the footage unspooled.

The existence of the committee has already become politically divisive, with House Minority Leader Rep. Kevin McCarthy (R-CA) prohibiting Republicans from participating. Still, two breakaway GOPers are serving at the request of House Speaker Nancy Pelosi (D-CA): Rep. Adam Kinzinger of Illinois and Rep. Liz Cheney of Wyoming. They now face calls by members of their own party to be punished, and have been mocked by McCarthy himself as “Pelosi Republicans.”

Seven people died as a result of the sacking of the Capitol, including three police officers. Many Capitol cops have quit in the aftermath of Jan. 6, and a large number of those who remain feel ill-prepared to fend off another attack. Dozens of rioters were members of extremist groups, including the Oath Keepers and the Proud Boys. Others were QAnon acolytes. And a not-insignificant portion of the insurrectionists were either current or former military or law enforcement officers.

It shouldn’t have come as a surprise: As The Daily Beast previously reported, there were countless clues left beforehand on social media, by activists, and then-President Donald Trump himself, that Jan. 6 would not be a peaceful day.

Gonell emigrated to the United States from the Dominican Republic in 1992.

“I looked up to the United States as the land of opportunity, a place to better myself,” he told the committee. “From the moment I landed at JFK… I have tried to pursue that goal, and fully achieve that goal on many levels.”

He was the first in his family to graduate college, join the Army, and become a police officer. He raised his hand and swore to protect the Constitution of the United States multiple times, “because this country gave me an opportunity to become anything that I wanted.”

But as he battled a pro-Trump mob on Jan. 6 that was trying to disrupt the official certification of then-President-Elect Joe Biden’s electoral victory, Gonell was “particularly shocked at the scene.” The rioters were “violently attacking us with the very American flag” these people claimed to love and respect.

Some of the rioters wore tactical gear, including bulletproof vests and gas masks, Gonell testified. They “forcibly took our batons and shields to use them against us,” he said, noting that the coordinated attack led him to believe that many of the insurrectionists had law enforcement or military experience.

“My survival instincts kicked in and I started kicking and punching, as I tried in vain to get the officers’ attention behind and above me. But they could not help me because they also were being attacked.”

“The rioters were vicious and relentless, [and] we found ourselves in a violent battle,” Gonell continued. He described the moment an officer nearby was pulled into the pulsating crowd. Gonell said he tried to help, but almost immediately came under attack himself.

“When I tried to help the second officer, I fell on top of some police shields on the ground that were slippery because [of] the pepper spray and bear spray,” Gonell testified, his voice frequently breaking with emotion. “Rioters immediately began to pull me by my leg, by my shield, by my gear strap on my left shoulder. My survival instincts kicked in and I started kicking and punching, as I tried in vain to get the officers’ attention behind and above me. But they could not help me because they also were being attacked.”

Gonell described the scene as “a prolonged and desperate struggle.” The rioters, he said, were shouting, “Trump sent us,” telling him and the other officers on the scene, “Take the right side. We want Trump.”

Gonell said he “could have lost [his] life that day, not once but many times.” However, as soon as he recovers from his injuries, he will “continue forward and proudly serve my country in the U.S. Capitol Police.”

“As an immigrant to the United States,” he said, “I’m especially proud to have defended the U.S. Constitution and our democracy on January 6.”