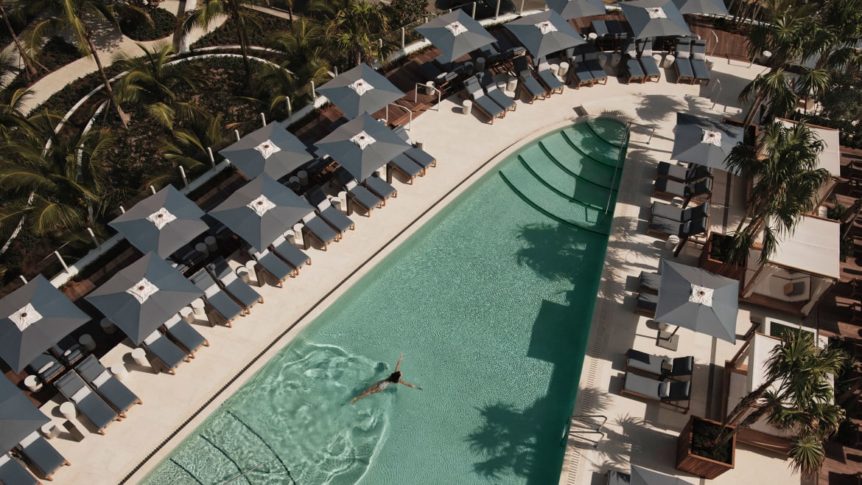 It looks, at a glance, like every white-and-glass tropical tower from Rio de Janeiro to South Florida, but a second look reveals something startling about the new Four Seasons Fort Lauderdale, designed by Kobi Karp. It plows its way out of the oceanfront skyline here, its shape leaving no doubt as to its inspiration from the ships that dot the horizon. The feeling of being on a ship, or actually, of being anywhere other than Fort Lauderdale as you imagined it, is a central part of this truly fabulous new hotel’s experience which is the latest selection for our series on exciting new hotels, Room Key.

When the hotel invited Beast Travel to visit, we asked for recommendations on social media as we’d never ventured here except to fly in and out en route to Miami. The responses were telling: “Just don’t go” or “Get in an Uber to Miami” were the gist of the replies. But then messages trickled in from locals or frequent visitors who swore that the city was actually a gem whose reputation is part of what allows it to keep its charm. Miami may be awash in money with a crazy party scene, elite restaurants, and glamour, they said, but Fort Lauderdale has the same beach without the crime or the pressure to keep up with the Joneses. Miami is no longer relaxing, they claimed, but Fort Lauderdale still is.

The hotel’s aesthetic is mid-century modern meets Caribbean meets yacht, a combination that hits you full-force when you first walk in. A two-floor tropical Neutra-esque atrium takes up most of the lobby and will have you whipping out your phone for a social media-friendly shot. Tucked behind a sharp-edged staircase and curtain of grayish-brown marble wall are the elevators, which take you up to the rooms, restaurant, gym, and spa. A detail we’ve come to appreciate lately at Beast Travel is how a hotel does its hallways–are they dreary and drab? A place merely to scurry through on your way to your room? A chance for the designer to show some creativity and flair? Here at the Four Seasons Fort Lauderdale, the first thing you notice is that the nautical blue and white striped carpeting is so plush you nearly sink into it, largely the result of its newness but a godsend to those who like quieter hotels. Tara Bernard, the designer who oversaw the interior decoration, livened up the spaces with one simple but lovely touch–walls broken up by large wood frames of taupe canvas.